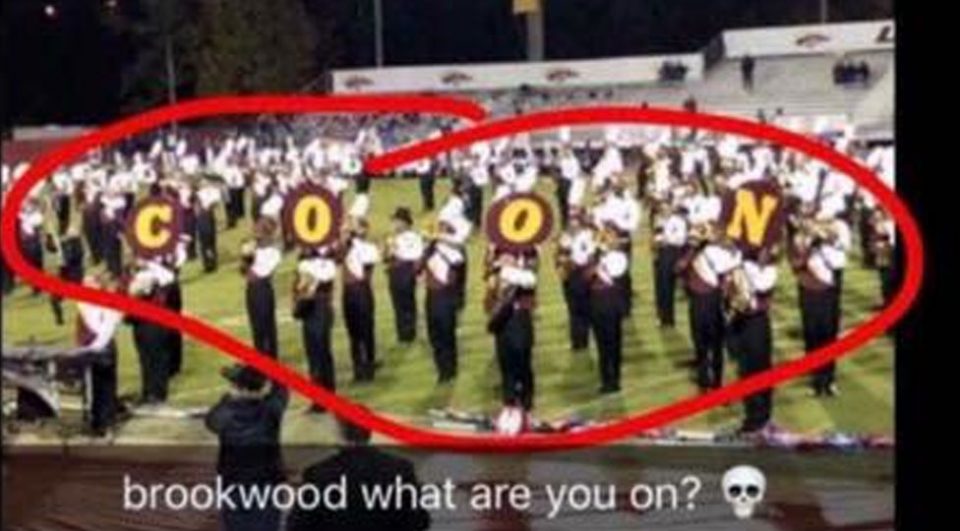 The city of Snellville, Georgia, is just a 40-minute ride east of downtown Atlanta. Named after a powerful family of slave owners, its once bucolic nature has been stained by racism from young students using a very old racist slur.

It occurred over the weekend when Brookwood High School in Snellville played rival Lakeside High in football. During the halftime show, band members took to the field, and members of the sousaphone section decided to play a senior prank. The large horn section has instrument covers that are used to spell out the school’s team and mascot known as the Broncos. But four students chose letters to spell out C-O-O-N and displayed the racial slur on the field for all to see.

Members of the crowd were outraged and what a few adolescent boys thought would be a cool prank has embarrassed many in the community. Pictures of the incident spread quickly across social media and sparked a response from the school’s principal William Ford, who wrote an open letter to the parents and community apologizing for the actions of the students.

“Not only was the appearance of this term during our halftime show hurtful and disrespectful to audience members, it also was disappointing, as it does not reflect the standards and beliefs of our school and community,” Ford’s letter read in part. “We are a very inclusive community, and we care about all of our students. We are concerned that this situation occurred and are committed to taking steps to ensure this does not happen again.”