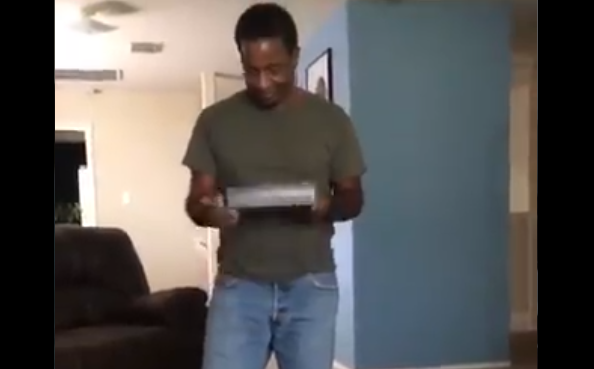 The father of Twitter user KB Strawder Jr. has been a lifelong fan of Hall of Fame music legend Janet Jackson.

As a present for the patriarch, the children treated the unnamed father to tickets to see the Control singer while she was in town.

The father’s reaction to opening an envelope to find a ticket to see Janet is priceless. He literally jumped out of his seat and went prancing around the living room in shock that his children gifted him a concert seat to see his musical idol.

Watch my dad’s reaction to him finding out that my brother and I are taking him to Las Vegas to see @janetjackson 😂😂😂😂 pic.twitter.com/j34AYEp0cT

When folks on Twitter saw the video of the dad’s reaction, they tagged the singer repeatedly in the comments, hoping she would see.

Well, it looks like the superstar caught wind of the Twitter post because the “All For You” singer pop star went a step further and surprised the parent after the show.

Check out little “Penny” from “Good Times”  — as the father stated nostalgically — as she wraps him up in a warm embrace backstage. It is shown from two angles, once on Twitter and another on Instagram.

Remember my dads reaction on Father’s Day to him finding out he was going to see @JanetJackson show in Las Vegas?….well we went to the show and there was one more surprise. pic.twitter.com/NjMAQOMWkN