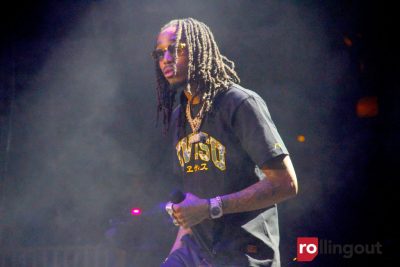 Migos rap trio has developed a reputation over the years as being quite temperamental.

And what happened during Paris Fashion Week will certainly contribute to and amplify that narrative. Migos member Quavo was captured on film throwing several punches at people at a Paris nightclub in the early morning hours, TMZ reports.

The entertainment publication stated that Quavo, 28, whose real name is Quavious Keyate Marshall, tried to enter the Palais Maillot at 2:30 a.m. Quavo was in Paris to support his comrade Offset’s Paris Fashion Week show.

However, security didn’t recognize Quavo as a VIP guest and would not immediately allow him entry into the premises, setting Quavo off emotionally.

“The party was insane, so many people. With all the craziness, the security didn’t recognize him at the door,” an insider told Page Six. “[They] made him wait 10 minutes at the door like a nobody.”

Clearly irritated, Quavo would up throwing hands at people who got too close to him, according to TMZ.

“Some other idiot was trying to stick to Quavo on the way out and Quavo punched him,” the insider said adding that there were “too many fans screaming.”

The source told TMZ that the episode “wasn’t a real fight” and was “more of an altercation,” that “shocked” some fans, as you can tell from the spontaneous screams.

Another matter is that Quavo was not orbited by his usual security team.

“That’s why they got so close to him,” the source told TMZ.