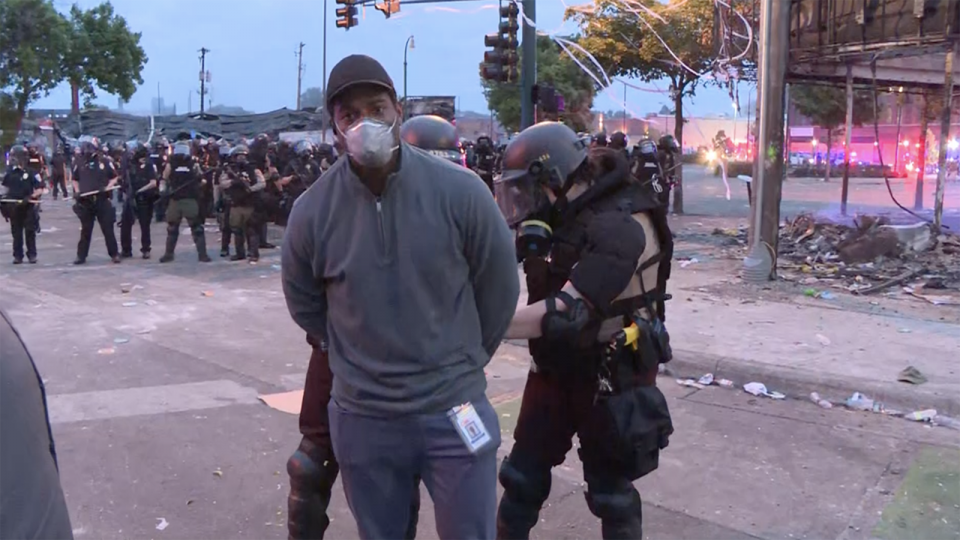 A Black CNN reporter was arrested while covering the uprising in Minneapolis.

On Thursday, May 28, 2020, reporter Omar Jimenez was reporting on the incidents that have occurred since the police-involved death of George Floyd.

During a live segment, Jimenez was approached by multiple troopers with the Minnesota State Patrol dressed in riot gear. Jimenez complied with their requests after he was told to stand in a specific area.

“Put us back where you want us,” Jimenez said respectfully to the state troopers. “We are getting out your way, so just let us know. Wherever you’d want us, we will go.”

Two state troopers grabbed Jimenez’s arms and placed his wrists in handcuffs. Jimenez asked why he was being arrested and was not given an answer before he was led away from the scene.

“You’re arresting him live on CNN. We told you before that we are with CNN,” someone off-camera and apparently on CNN’s production team said.

With the camera still rolling, the cops also arrested Jimenez’s producer, Bill Kirkos, and eventually took the cameraman, Leonel Mendez, into custody, too.

Moments after the incident occurred, CNN responded with a statement on Twitter, calling the arrest “a clear violation of their First Amendment rights.”

The Minnesota State Patrol disputed CNN in a tweet that read, “In the course of clearing the streets and restoring order at Lake Street and Snelling Avenue, four people were arrested by State Patrol troopers, including three members of a CNN crew. The three were released once they were confirmed to be members of the media. (sic)”

This is not abstract: a black reporter was arrested while doing his job this morning, while the white police officer who killed George Floyd remains free. I am glad swift action was taken, but this, to me, says everything.