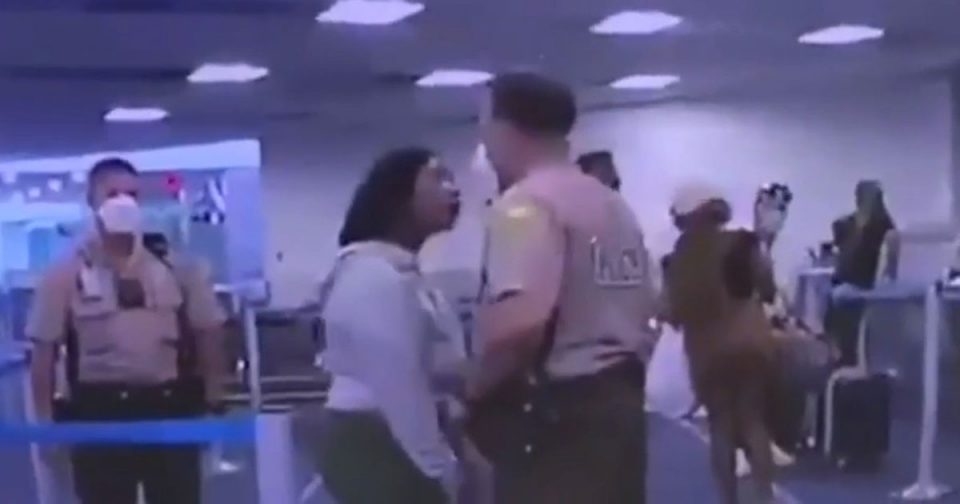 Another incident of police brutality has gone viral.

On Wednesday, July 1, 2020, an altercation between a Black woman and a Black police officer turned violent, according to video obtained by the Miami Herald.

The issue began after the woman, Pam Anderson, 21, reportedly missed her flight at Miami International Airport and began complaining loudly. A gate agent called the police, and things escalated from there. Anderson yelled at Antonio Clemente Rodriguez, who is a Black officer of Puerto Rican heritage.

Anderson shouted at Rodriguez, “You acting like you White when you really Black. … What you want to do?”

She then walked a few steps closer to Rodriguez while continuing to yell at him. Rodriguez struck the woman in the face, and she was thrown to the floor and placed in handcuffs. The officer claimed that he was head-butted and bumped by the woman. However, the footage does not appear to show that Anderson did not head butt the officer.

Anderson was arrested and charged with battery on a police officer and disorderly conduct.

In the last 24 hours, the video has gone viral on social media.

As of Thursday, July 2, Rodriguez had been relieved of duty. Alfredo Ramirez III, director of the Miami-Dade Police Department, released a statement along with Miami-Dade County Mayor Carlos Giménez.

“I am shocked and angered by a body cam video that I just saw involving one of our officers,” Ramirez said in the statement posted on the Miami-Dade Police Department’s Facebook page. “I’ve immediately initiated an investigation and ordered that the involved officers be relieved of duty. Actions such as these undermine the hard work that we have invested in our community and causes my heart to break for our community and for the vast majority of our officers who dedicate their lives to serving our County. This will not stand, and I assure our community that any officer acting in this vain will be held to account.”