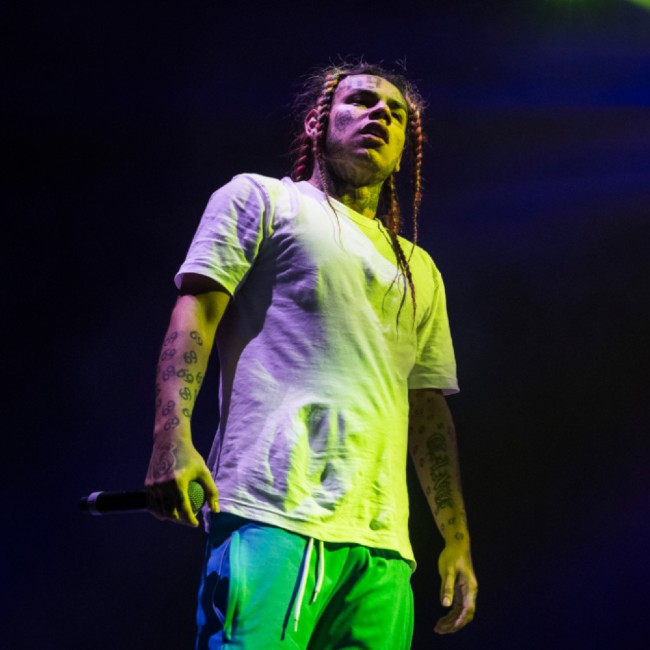 Tekashi 6ix9ine has broken his wrist after falling over his dog.

The 23-year-old rapper — whose real name is Daniel Hernandez — was left in agony when he went downstairs at around 3 a.m. on Tuesday, Aug. 11, 2020, to grab a snack when he tripped over French bulldog Poppy and injured himself when he tried to break his fall.

Tekashi told TMZ his hand got caught in the stairway banister, causing him to break a bone in the back of his wrist, though he didn’t realize the extent of his injury until much later when he woke up later that day and sought treatment because he still felt pain.

After visiting a doctor, X-rays revealed the damage and the rapper will now spend the next three to five weeks in a cast.

Tekashi has only been back in his home since April, when he was released from prison and approved to spend the rest of his sentence — which was due to end early on 31 July — under house arrest due to coronavirus concerns.

The “Stoopid” singer was jailed for two years in December on charges relating to attempted murder, conspiracy to distribute heroin and firearms offenses but was allowed out of prison because he is asthmatic and was therefore considered “high risk” of developing complications and potentially dying if infected with the virus.

The judge had originally denied a request for Tekashi to be placed in home confinement after he claimed it was up to the Federal Bureau of Prisons to handle changes to an inmate’s incarceration.

But after Tekashi’s lawyer Lance Lazzaro wrote another letter to Engelmayer stating he has purview over his compassionate release request, the judge agreed to grant the request and ordered prosecutors to say if they opposed the move.

U.S. Attorney Geoffrey Berman wrote in response: “In the event the Court finds ‘extraordinary and compelling reasons’ presented by the defendant’s medical condition, placing him at high risk during the COVID-19 outbreak, the Government does not oppose the defendant’s motion for compassionate release.”