Lil Nas X has released a children’s book called C Is For Country that teaches kids the alphabet and self-confidence in the process. The “Old Town Road” rapper linked up with Random House Kids, a division of Penguin Random House, to publish the book.

“Join superstar Lil Nas X — who boasts the longest-running #1 song in history — and Panini the pony on a joyous journey through the alphabet from sunup to sundown,” read a statement from Random House. “ Experience wide-open pastures, farm animals, guitar music, cowboy hats, and all things country in this debut picture book that’s perfect for music lovers learning their ABCs and for anyone who loves Nas’s signature genre-blending style.

“Featuring bold, bright art from Theodore Taylor III, with plenty of hidden surprises for Nas’s biggest fans, C Is for Country is a celebration of song and the power inside us all.” 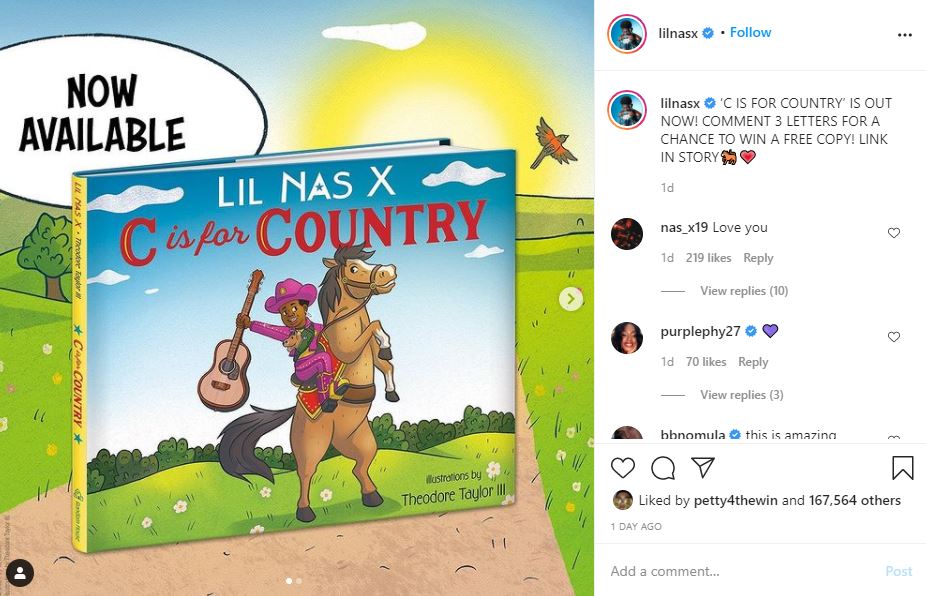 ((Image source: Instagram – @lilnasxLil Nas X jokingly announced the release of his ABC picture book on Twitter, writing: “MY CHILDREN’S BOOK “C IS FOR COUNTRY” IS OUT NOW!!!! GO GET IT PLEASE I REALLY NEED TO PAY MY RENT!” 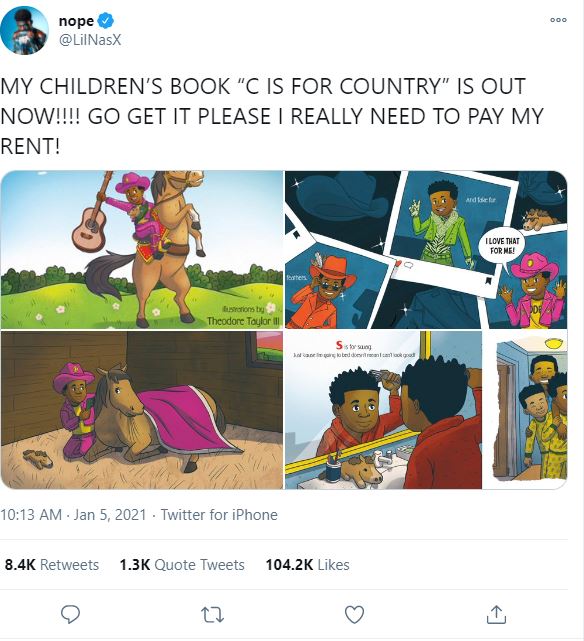 (Image source: Twitter – @lilnasx)In an interview with Radio.com, Lil Nas X explained that he dedicated this book to his nieces and nephews and wanted to instill in kids that they can do anything. He also detailed how the book came to be. “ ‘Old Town Road’s success, especially amongst kids, like, really made sense,” he said. “They brought the idea of this book to me, and I’m like, ‘OK, this makes perfect sense. Let’s go with this.’ And you have this amazing illustrator, this amazing company behind it, Random House, and, you know, we put it together, and now we’re out. … It’s crazy feeling to have a children’s book, or a book in general, this early in my career.”

The book is intended for children ages 3 to 7 and can be purchased on Random House’s website. It’s already doing huge numbers, according to the country rapper, who wrote, “WE JUST HIT NUMBER 8 ACROSS ALL KIDS BOOKS IN THE WORLD! THANK U GUYS!”

Lil Nas X further revealed that he has a new album coming out this year in the interview and dropped the his new video “Holiday” in December.