Offset gave his wife Cardi B a next-level birthday present when he bought her a glamorous new home in the Dominican Republic.

After the party got jumping, Offset, 29, then took the mic and showed off Cardi’s new estate in the Caribbean island nation.

Offset bought Cardi B a house in the Dominican Republic for her birthday. 🥺❤️ pic.twitter.com/OmVhOdEluz

What made the gesture extra meaningful to Cardi is the fact that she descends from the D.R. where her father was born. Her mother is also Caribbean as she hails from Trinidad & Tobago.

Cardi, who is also 29, then partied the night away at the lavish affair.

After the party, Cardi couldn’t wait to tell her 110 million followers gave her the present of a lifetime because he’s been listening much more than he ever gave on.

“For a hot minute now I’ve been telling Set that I really want to invest in short term home rental properties in the DR and other Caribbean countries (since people vacation all year around in those locations), but I felt like he didn’t agree with me and would rather put money into other investments,” she said, adding that he’d been paying attention the whole time. 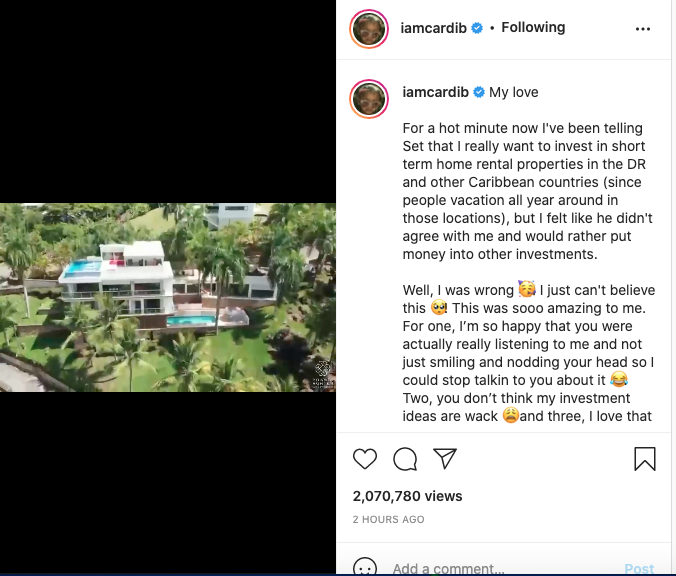 Offset and Cardi have been married since 2017 and welcomed their daughter Kulture a year later in July 2018. Cardi gave birth to the couple’s son in September 2021.