Urbanites were simmering with excitement after learning that the romantic classic, The Best Man franchise, is now being adapted into a TV drama series.

The announcement for the TV show, “The Best Man: The Final Chapters,” was first made in early 2021 by director Malcolm D. Lee. Later in the year, one of the film’s stars, Nia Long, confirmed that the old crew will return to reprise their roles.

“I think we’re all looking forward to it and I know Malcolm [Lee] is working really hard to get the scripts to where he wants them and to give the audience what they want. People have been asking for this for a long time and now they get to see us weekly. So, it’ll be nice,” said Long, who also starred with Chestnut in 1991’s Boyz N the Hood.

However, there had not been any news about the project since.

But on Tuesday, March 15, 2022, the franchise’s marquee star, Morris Chestnut, posted a selfie with Lee for his two million followers. The Boyz N the Hood star captioned the photo, “1st Day on the set with @malcolmdlee.” 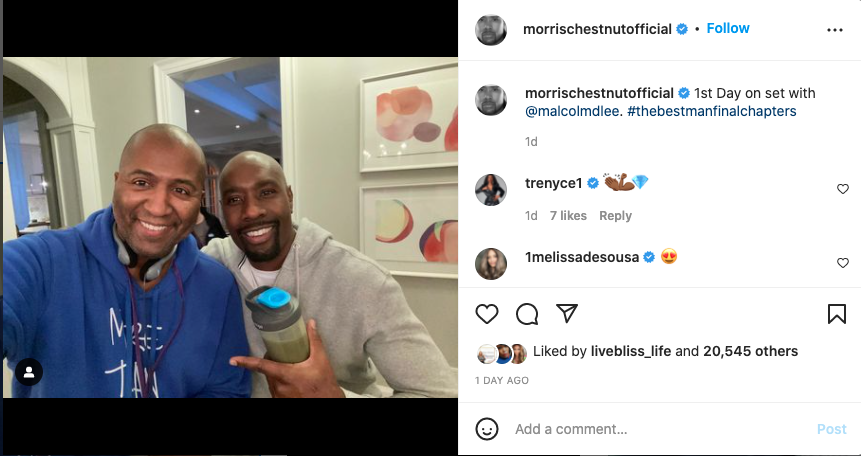 Long and Chestnut will be joined in the TV series with Taye Diggs, Terrence Howard, Sana Lathan, Regina Hall, Melissa De Sousa and Harold Perrineau. They all reportedly agreed on seven-figure deals to resuscitate their roles for the series, which is scheduled for a September 2022 debut.

The only conspicuous absence from the original cast from 1999’s The Best Man is actress Monica Calhoun. Her character, as fans of the franchise remember, died from cancer in the sequel, The Best Man Holiday, in 2013.