Dead heat: How Escape Room players even try ritual sacrifice to get out 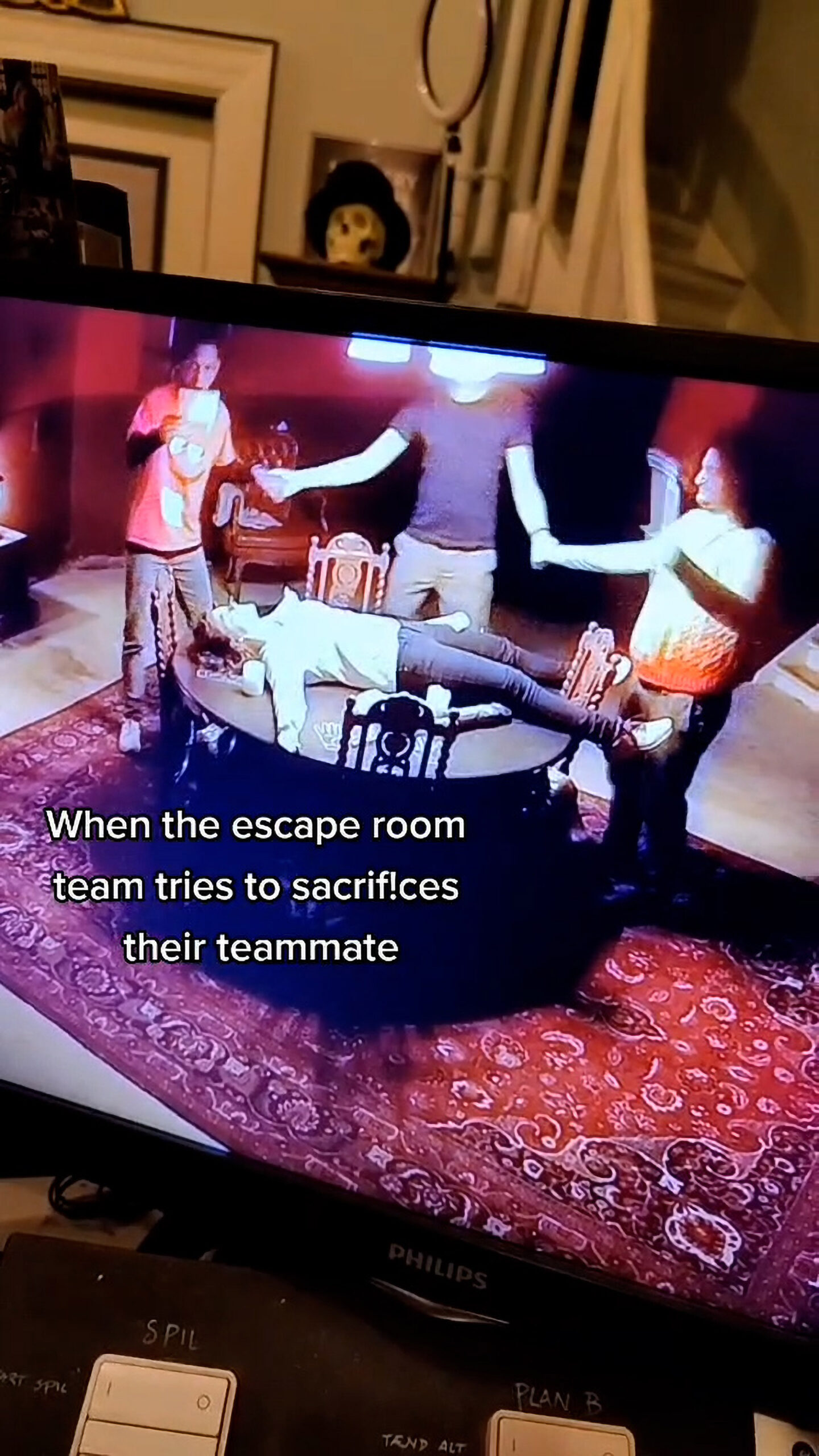 This is the moment players shock staff at an escape room challenge by trying to ‘ritually sacrifice’ one of their team members to find their way to freedom.

In a series of uploads by the company Mystery Makers – based in Denmark – one player is seen being backed into a fridge by her teammates.

Another group holds hands and chants as they prepare to ‘sacrifice’ a player who is splayed across a table.

In another scene, a young man snogs what seems to be a human skull and performs a ritual dance to regain access to the outside world.

She said: “The best part about the job is watching people try so many different and creative things to get out of the room.

“As a game master you see the teams have fun and step out of their comfort zone, which usually makes for pretty funny situations.”

An escape room is a game in which players are confined to a room or other enclosed setting and are given a set amount of time to find a way to get out by discovering hidden clues and solving a series of riddles or puzzles.

Mystery Makers founder Mads Lind said the company started out as a wedding gift in the form of a treasure hunt and soon turned into a successful online business.

A study in the journal ‘Simulation and Gaming’ explains that escape rooms are a useful team-building exercise that allows people to “work together and think critically in order to solve a series of puzzles or challenges to escape a room”.

Mathilde told Zenger News: “I work in the marketing department and I help out with the day-to-day responsibilities when it comes to the Game Masters who run the escape rooms. I am also the content creator of the Mystery Makers TikTok account.

“I started working for Mystery Makers as a Game Master in 2019, and then when I started my masters in 2020, Mystery Makers offered me to start as a trainee in the marketing department and gain some more responsibilities in the day-to-day running of the company.

“The best part about the job is watching people try so many different and creative things to get out of the room. As a game master you see the teams have fun and step out of their comfort zone, which usually makes for pretty funny situations.

“I started the TikTok channel, based on a group chat that the game masters have, where we share funny stories with each other, about the teams getting creative.

“We have noticed that a lot of people are tagging their friends in the comments, saying that they want to go to an escape room, and we have had some teams mention our TikTok account or try to recreate some of our videos while they are in one of our rooms.

“Once a guy proposed to his girlfriend in the room. He had asked us to switch out the final key to the door, with an engagement ring.

“She found the ring at the end and said yes, it was a very creative way of proposing.”

Mystery Makers started in 2010, when two friends came up with a funny Da Vinci Code-inspired treasure hunt for their pal at his wedding.

At the beginning of 2014, the company created the first Scandinavian escape room, which they called Mystery Room. Here, guests would pay to get locked up in mysterious rooms full of puzzles that they needed to solve in a hectic battle against time in order to escape.

The post Dead Heat: How Escape Room Players Even Try Ritual Sacrifice To Get Out appeared first on Zenger News.