Rap boss Boosie Badazz went volcanic on actress Gabrielle Union after she criticized him for the many times he mocked her transgender daughter, Zaya Wade, as well as Lil Nas X.

Union was being interviewed by renowned sports journalist Jemele Hill when the subject of Boosie was broached.

Union slow-cooked Boosie over hot coals for being obsessed with how she and her husband, NBA legend Dwayne Wade, choose to raise their transgender daughter.

“He’s so preoccupied. It’s almost like, thou doth protest too much, little Boos,” Union said in the November 2022 interview which has now just gone viral. “You got a lot of d— on your mind!”

Union continued to scorch Boosie in the clip, saying “[Zaya and Lil Nas X live in his head] rent-free! It’s like, ‘Sir.’ Something you want to go ahead and tell us? This is a safe space, we can be your sanctuary. I don’t think he had a safe space [growing up].”

Before Sunday, Dec. 4, 2022, an unofficial truce had been reached between Boosie and the Union/D-Wade clan. The Badazz Music Syndicate boss apologized to D-Wade for all of the negative things he said about his daughter.

“I apologize to Dwyane Wade,” he said during an appearance on Mike Tyson’s “Hotboxin with Mike Tyson” podcast. “I mean what I said but … I shouldn’t have said the s— about your child.”

The cold war between the two sides has now gotten steaming hot again. Once Boosie got wind of Union’s scathing criticisms of him — she also insinuated that Boosie may want to come out of the closet — Boosie went full nuclear on Union and D-Wade. 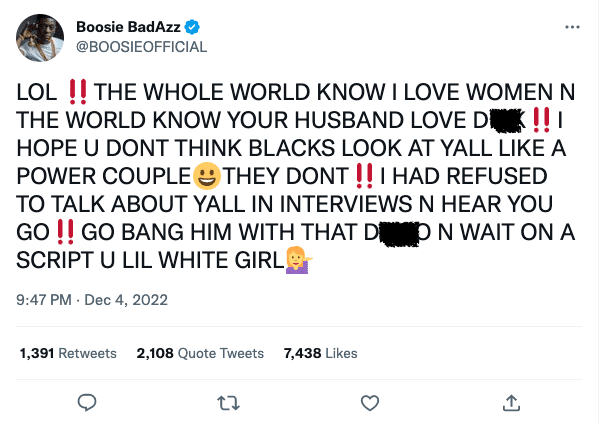 Boosie also challenged Union to keep his name out of her mouth for the sake of his sanity.

Check out the complete Union interview with Hill below: