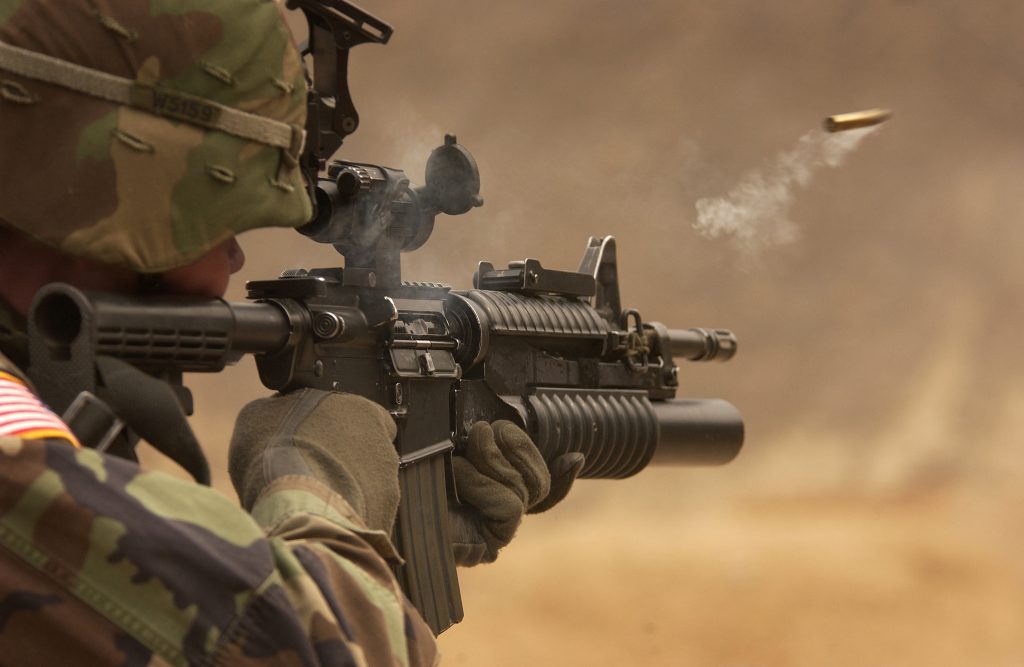 Young men in areas of some American cities are three times more likely to be shot dead than those deployed to Iraq and Afghanistan at the height of their civil wasr, according to new research.

Compared to the risk of combat death faced by US soldiers deployed to Afghanistan, the findings showed that young men living in the most violent zip code of Chicago had 3.23 times higher average risk of  homicide.

Scientists say their shocking findings put the risk of firearm-related death in perspective – and called for an urgent need for violence reduction policies.

In 2020, firearms became the leading cause of death among children, teenagers and young adults in the United States.

However, young men in some US zip codes face disproportionately higher risks of firearm-related injuries and deaths often linked to gang violence and drug-related crimes.

Researchers at Brown University and the University of Pennsylvania compared the risk of firearm-related death for young adult men living in the most violent areas in four major American cities with the risks of combat death and injury faced by US military personnel who served in Afghanistan and Iraq during active periods of war.

The findings, published in JAMA Network Open, showed that young men from zip codes with the most firearm violence in Chicago and Philadelphia faced a “notably higher risk” of firearm-related death than US military personnel deployed to wartime service in Afghanistan and Iraq.

However, the opposite was true in two other cities: The most violent areas in New York and Los Angeles were associated with much less risk for young men than those in the two wars.

In all zip codes studied, risks were overwhelmingly borne by young men from minority racial and ethnic groups, according to the findings.

Study co-author Doctor Brandon del Pozo said: “These results are an urgent wake-up call for understanding, appreciating and responding to the risks and attendant traumas faced by this demographic of young men.”

Dr del Pozo, an Assistant Professor at Brown’s Warren Alpert Medical School, recently released a book called “The Police and the State: Security, Social Cooperation, and the Public Good” based on his academic research as well as his 23 years of experience as a police officer in New York City and as chief of police of Burlington, Vermont.

He said: “Working as a police officer, I witnessed the toll of gun violence, and how disruptive it was for families and communities.

“It stood out to me that the burden was not distributed evenly by geography or demographic. Some communities felt the brunt of gun violence much more acutely than others.

“By analyzing publicly available data on firearm fatalities in cities and in war, we sought to place that burden in sharp relief.”

At the same time, Dr del Pozo said, he and the other study authors were responding to oft-repeated inflammatory claims about gun violence in American cities.

He said: “We often hear opposing claims about gun violence that fall along partisan lines.

“One is that big cities are war zones that require a severe crackdown on crime, and the other is that our fears about homicides are greatly exaggerated and don’t require drastic action.

“We wanted to use data to explore these claims – and it turns out both are wrong. While most city residents are relatively safe from gun violence, the risks are more severe than war for some demographics.”

The researchers obtained information on all fatal and non-fatal shootings of 18- to 29-year-old men recorded as crimes in 2020 and 2021 in Chicago; Los Angeles; New York; and Philadelphia – the four largest US cities for which public data on those who were shot were available.

According to CBS News, The widow of slain El Monte Police Sgt. Michael Paredes and her attorney took legal action against L.A. County District Attorney George Gascón and the county Tuesday over the sergeant’s shooting death in June.

Gascón faced criticism following the shooting deaths of Paredes and Officer Joseph Santana in June after it was determined the gunman — Justin William Flores — was on probation for a weapon violation that critics contended should have landed him behind bars.

“It is the D.A.’s responsibility to make sure that he is following his legal obligations and following the law,” Paredes said at a downtown Los Angeles news conference announcing the claim. “And unfortunately, in this situation, and in many situations, this is not being done. The law is not being followed by our district attorney and making sure that the California Three Strike law is being put into play.”

Figures were aggregated to the zip code level and linked to corresponding demographic characteristics from the US Census Bureau’s 2019 American Community Survey.

The analysis included 129,826 young men residing in the four cities considered in the study.

The researchers found that compared to the risk of combat death faced by US soldiers who were deployed to Afghanistan, the more dangerous of the two wars, young men living in the most violent zip code of Chicago had 3.23 times higher average risk of firearm-related homicide.

Singling out the elevated dangers faced by a US Army combat brigade in Iraq, the young men studied in Chicago still faced “notably greater” risks, and the ones faced in Philadelphia were comparable.

However, the findings were not observed in the most violent zip codes of Los Angeles and New York, where young men faced a 70 percent to 91 percent lower risk than soldiers in the Afghan war across fatal and non-fatal categories.

Dr del Pozo said: “Exposure to combat has been associated with stress-inducing hypervigilance and elevated rates of homelessness, alcohol use, mental illness and substance use, which, in turn, are associated with a steep discounting of future rewards.

“Our findings – which show that young men in some of the communities we studied were subject to annual firearm homicide and violent injury rates in excess of three percent and as high as 5.8 percent – lend support to the hypothesis that beyond the deaths and injuries of firearm violence, ongoing exposure to these violent events and their risks are a significant contributor to other health problems and risk behaviors in many US communities.”

He says that the health risks are likely even higher for people in cities because they need to face their “battles” every day over a lifetime, as opposed to military personnel on a tour of duty in Afghanistan, which typically lasted 12 months.

Dr del Pozo added: “The findings suggest that urban health strategies should prioritize violence reduction and take a trauma-informed approach to address the health needs of these communities.”

As of recent, Chesa Boudin was recalled in the city of San Francisco due to his soft-on-crime policies that led to his ousting as the San Francisco District Attorney. Residents were dissatisfied with the increase in crime and his handling of minor offenses.

“In the last several days, Southern California, Los Angeles in particular, has seen a lot of notable attacks and murders occur,” explained former lobbyist Harry Schultz to the Globe on Tuesday. “If you recall, in November and December 2021, the Bay Area had a bunch of high profile robberies, like the Union Square robberies and the flashmob robbery at a San Jose mall. Incidents both in and outside of San Francisco that was blamed on then-DA Chesa Boudin’s policies. And then helped get him recalled.”

Produced in association with SWNS Talker.