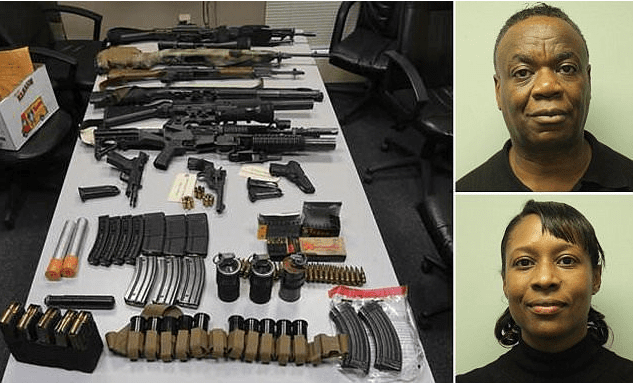 A Texas couple, Francho Bradley, 59, and Adrianne Jennings, 40, was arrested on Saturday, March 24, 2018. While more than 200K people attended the March for Our Lives demonstration in Washington, D.C., and 800-plus ancillary protest marches across the globe, Bradley and Jennings were allegedly planning for a big bang in Massachusetts. The pair was arrested in […]

Jason Russell has been running since he was a kid. A founding member of Black Men Run, he is dedicated to making fitness and a strong mindset a priority among black men. That’s why he’s more than excited that 2014 Boston Marathon winner Meb Keflezighi’s time of 2:08:37 made him the first American male to […]

This has gotten ridiculous. Tens of thousands of young American women and girls have began a social media movement to save the life of accused Boston bomb terrorist Dzhokhar Tsarneav, despite the horrific crimes he’s accused of committing against the United States. In essence, thousands of American teen girls are making alleged Boston Marathon bomber into […]

Ironic that the deceased Boston bombing perpetrator Tamerlin Tsarneav called his wife a whore and prostitute when he was the one creeping behind his wife, Katherine Russell. And today, that ex-girlfriend has a lot to say about the man who was killed by police in a shootout a little more than a week ago. Nadine […]

Not surprisingly, Boston bombing suspect Dzhokhar Tsarnaev reportedly told police that his older brother Tamerlan was the brains behind the attacks at the Boston Marathon that killed three and wounded more than 200. Some would immediately say that this is convenient, seeing how his brother is dead. A federal investigator CNN that Dzhokhar Tsarnaev, 19, […]

Raw and visceral responses poured like hot molten lava onto social media platforms when the federal government announced that suspected Boston Marathon terrorist and sole survivor, Dzhokhar Tsarneav, was charged with two federal crimes that could carry the death penalty if he is convicted. Hopefully we can get some info frm #Dzhokhar #Tsarnaev today. Personally, […]

Dzhokhar Tsarnaev, the infamous Boston bomb terrorist suspect, has been slapped with two federal criminal charges for the Boston Marathon massacre. Tsarneav, 19, is facing the death penalty if he is convicted these capital crimes. Attorney General Eric Holder, the head of the U.S. Department of Justice, announced moments ago the 19-year-old has been charged with […]

While Boston feverishly tried to identify those responsible for the Boston Marathon bombing on Monday, April 15, Dzhokhar Tsarnaev apparently wasn’t very worried. The 19-year-old was on the campus of University of Massachusetts-Dartmouth, where he was a sophomore, and went to class every day after the attack until officials released his photograph late Thursday. On […]

Suspected Boston Marathon terrorist Dzhokhar Tsarneav has recovered sufficiently enough from his gunshot wounds in the last few hours to begin communicating with federal authorities, the media reports. While still in serious condition with wounds to his leg and, most significantly, to his neck and still unable to audibly interact with police, Tsarneav, 19, has […]

Perhaps out of pure horror and disgust or an act of self preservation, or a little of both, family members of the Boston Marathon bombing brothers, Dzhokhar and Tamerlin Tsarneav, speak out against their relatives. Tamerlin Tsarneav, 26, was killed early Friday morning in a shootout with police in Watertown, Mass. after he and his […]

While the world remembers the innocent bystanders whose lives were so quickly taken at the hands of homemade bombs by brothers and terror suspects Tamerlan Tsarnaev (deceased) and Dzhokhar Tsarneav (captured), it’s hard to believe they actually had ties here in America. It would be easy to wrap our minds around headlines that included terms terrorist […]

Boston can finally exhale. A sudden loud chorus of cheers pierced the dark, quiet night in Waterford, Mass., just as news of the capture and apprehension of the elusive second Boston Marathon bomb suspect Dzhokhar Tsarneav spilled out the police scanners. The largest manhunt in modern American history — and most certainly an unprecedented search […]

“We got him.” After a long, exhaustive, terrifying day that featured one of the greatest manhunts in modern American history — and certainly in Boston history — the second Boston Marathon bombing suspect Dzhokhar Tsarneav has been reportedly been taken into custody. The aforementioned quote was a tweet from Boston mayor Tom Menino to confirm […]

Just moments after the Massachusetts State Police and Gov. Deval Patrick released the complete police lockdown in Watertown, Mass., and the rest of the greater Boston area, endless parade of police vehicles stormed to a neighborhood with sirens screaming and lights blaring after hearing automatic gunfire. Dozens of local, county, state and federal police cars […]

What you don’t know about Chechnya

The province of Chechnya was catapulted to the forefront of America’s consciousness after it was originally reported that the two Boston Marathon terrorists suspects, Dzhokhar and Tamerlan Tserneav, originated from the area in Southeast Russia. We have since learned from the suspects uncle, Raslan Tsarni of Montgomery County, Md., a suburb of Washington, D.C., that […]

The uncle of the Boston bombing suspects railed against the brothers in a five-minute tirade press conference in suburban Washington to separate himself from his nephews’ heinous actions and to ensure the country understood the depths of his patriotism and philosophical outlook. Standing outside a brick home in Montgomery County, Md. on Friday, Ruslan Tsarni […]

After several days of little to no information about the Boston Marathon bombing suspects, a much more complete biography of the two men has been sketched together by federal investigators and media outlets. As you probably know by now, the two men are brothers Dzokhar Tsarnaev and Tamerlan Tsarnaev who were born near Chechnya, Russia […]

The two Boston Marathon bombing suspects are brothers of Chechen origin who have been residing in the Boston suburb of Cambridge, Mass., for more than a year, according to media reports from government officials. NBC reported that one of the suspects is 19-year-old Dzhokar Tsarnaev of Chechnya, a province in the southern part of Russia. […]