Antonio Brown names the NFL team he wants to play for

Despite the mercurial Antonio Brown’s antics with several NFL teams over the past three years, his street credibility and cultural cachet have nevertheless been amplified in equal proportions to his eruptions on the sidelines and in locker rooms. Brown has also become a popular personality on the interview circuit lately. He has both praised some […] 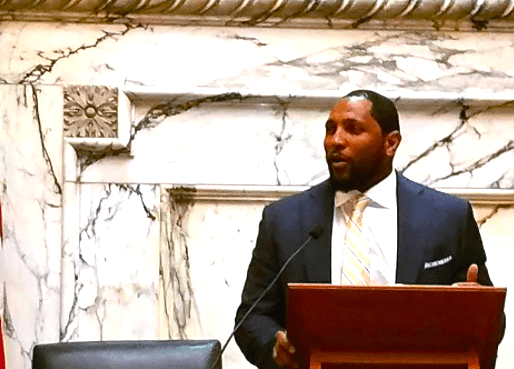 Ray Lewis wants the nation to believe a tweet is the reason Colin Kaepernick was not signed by the Baltimore Ravens. During an episode of Showtimes “Inside the NFL,” Lewis spoke about the Ravens’ initial interest in Kaepernick. Ravens’ starting quarterback, Joe Flaco, was experiencing back issues and Kaepernick appeared to be the perfect quarterback to […]

There is one way to avoid having a woman testify against you in court: marry her. As Ray Rice faces years in prison after being indicted on third degree aggravated assault on Thursday, he and his fiancée followed through on their plans to get married. Rice and Janay Palmer were married Friday night in a […]

Jen Heasley is ‘Cooking with the Pros’

Jen Heasley’s “Cooking with the Pros” a show that combines her passions, sports and food. She opens up about how she began and offers advice to up and coming entrepreneurs below. –Joi Pearson How did you get into cooking? My parents were very holistic people; they were big on being self-sustaining. We had a very large garden and […]

Ray Lewis ended his 17-year career as a Super Bowl champion. Lewis and the Baltimore Ravens defeated the San Francisco 49ers 34-31 on Feb. 3 at the Superdome  in New Orleans. Although Lewis will never play another down of football, his powerful words will continue to motivate and inspire. Click continue to read 12 inspirational […]

Dr. Dre supports Ray Lewis and the Ravens in the Super Bowl

When Dr. Dre was asked who his Superbowl XLVII team of choice was,  there was no hesitation towards supportung Ray Lewis and the Baltimore Ravens in the upcoming Superbowl. Not only does he talk fottball, but he also touches on last year’s Coachella moment when he brought out Hologram Tupac.  Take a look!

Most games from the second round of the NFL playoffs proved to live up to the hype. In an epic matchup between the Denver Broncos and Baltimore Ravens, the Ravens won a double overtime thriller 38-35; the Atlanta Falcons outlasted the Seattle Seahawks by winning 30-28; the San Francisco 49ers were too much for the […]