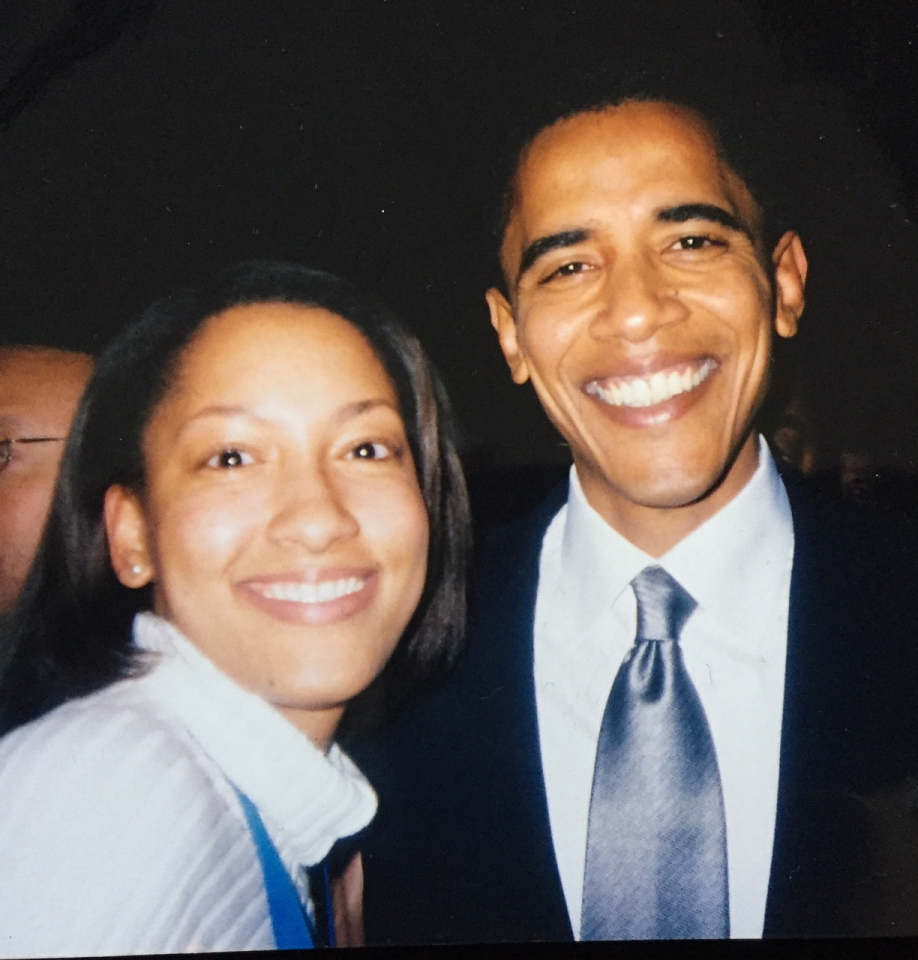 Last night, I was in the room at McCormick Place in Chicago with thousands of others as we said farewell to our president. Like Oprah’s “aha” moment, those who have volunteered or worked in some capacity with President Obama’s political campaigns over the years have their own Obama journey story. For me, I’ve had the blessing to be in the room for great moments with the campaign many times. My experience started in 2003 when I met Obama when he was running for Senate. A girlfriend and I were attending a young, Black professionals networking event at the Peninsula hotel in downtown Chicago. There were different vendors with tables showing off their brochures. Then-candidate Obama introduced himself to us and shared his handouts about his bid for the Senate. He shared that he needed more people like us to get involved in the political process through volunteering and getting the word out. After that brief conversation, I was ready to jump in and help. In his professorial way of speaking, he took the time to explain to us why he was running and what he thought he could do for folks like us if he was elected.

I began door-to-door canvassing, attending meet-ups at volunteers’ houses from the North Side to the South Side to plan outreach, handing out Obama yard signs, buttons, bumper stickers, branded towels and cleaning sponges. I phone banked. I contributed some of my hard earned money from my public relations management job to the campaign. I enlisted my brunch crew of girlfriends to join me in supporting Illinois’ next senator. We helped to organize a 3,000 person church rally on Martin Luther King Drive and worked with Black-owned companies to help donate food and other services to make the rally a success. That’s when I got my first picture taken with him. A picture that once he gained more popularity and prominence in the race, my mom would have made into an airbrush T-shirt for members of my family to wear in supporting the candidate. 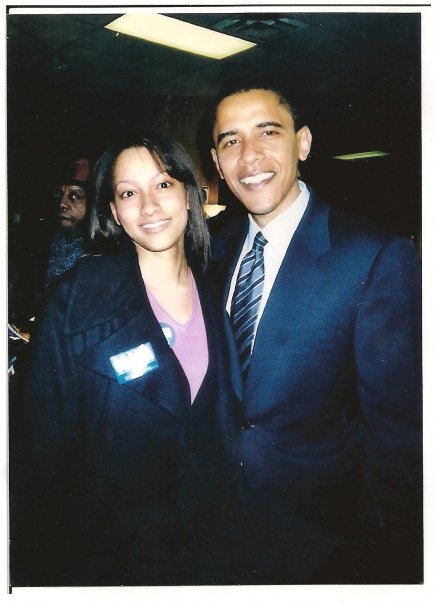 At first, when I told my parents I was doing volunteer work on the campaign for Barack Obama, they thought I was volunteering for someone named “Osama” and they were a bit concerned, even initially refusing to host a lawn sign in their yard because of their confusion around his name. We joke about it now, but his name was actually a “thing” in the beginning: a preliminary barrier that he would overcome and continue to hurdle in the years ahead. Once he won the Senate primary and Chicago all celebrated with a victory party at the Hyatt on Columbus Avenue, the campaign switched quickly from being grassroots to full political machine. In the beginning, I would attend meetings where there would be 10-20 people and Mr. Obama was there talking about the campaign. But once the campaign reached the tipping point where everybody knew who he was, it leveled up really quick.

I continued to be very involved with fundraising, continuing to phone bank, attending rallies (e.g. Super Tuesday speech) and talking about my candidate whenever I needed to convince a voter. Then he wins the Senate seat against great odds and serves as our senator until he announces the run for the presidency. At first, I was scared for what it could mean. Was this country ready for a black president? Would he and his family be safe? Most of us in the community asked these questions, but we moved forward to continue our support. I amplified my efforts helping to create a Black and Brown coalition called Project XChange to increase support for President Obama amongst the African American and Latino communities in Chicagoland. We held our fundraiser in the South Loop and a now defunct restaurant called Cuatro and with our combined efforts, raised thousands of dollars for the campaign and received some great media coverage.

The night Obama won the presidency, I was with a group of friends and we were watching the returns on CNN and when Wolf Blitzer announced he won, we erupted in explosive joy, pride, glee, all the good feels. In that moment, I knew I would attend his historic inauguration but had no idea how I would get there. What would become a true example of how Obama’s campaign could bring different people together, my client at the time, a Caucasian woman living in New Hampshire who initially had been a Hillary R. Clinton supporter, but then got very involved in the Obama campaign, invited me to attend the inauguration with her. I bought my plane ticket and we roomed together at the Tabard Inn in D.C. We stood together in the freezing cold of January and watched President Obama take the oath of office. And we’ve been friends ever since.

Over the past eight years, I’ve watched our president work extremely hard on our behalf to deliver that hope and change he pledged to this country. And I’ve watched the disrespect and insults he and his family have had to endure from ignorant racists, while still holding their heads up and representing the best of what it means to be human. I am always so proud when I see them presented as positive images in media. There are tons of think pieces that explore why representation matters and how their representation helped to usher in different views of how African Americans are perceived. As a communications executive, I understand the power of those images.

While Obama was serving in the White House, my life changed drastically as well. I met a great guy. I got married. I traveled the world and I ascended to the top of my industry becoming a communications executive vice president and a 40 under 40. My husband and I also attended the second inauguration together. I didn’t pay as close attention as before to what was happening in the White House. I got used to my president being Black and excellent and I started taking it for granted. Like his tenure would never end even though intellectually, I clearly knew the executive branch had a term limit. Then came 2016 and all the turmoil and ugliness of politics. And now January 2017 and the time has run out.

We must all bid our magnificent president and his beautiful family farewell. Some people understandably aren’t ready to let go. At President Obama’s farewell address, the crowd even started shouting “Four more years!” But, it’s time. This family has been on the world stage and had to work twice as hard as previous first families to present the best of themselves because as the first Black first family, the level of scrutiny was unfairly high. And they did it. They succeeded on every level, so they deserve a break. They deserve an ending to this part of their beautiful story. And I will look forward to what citizen Obama succeeds at next.