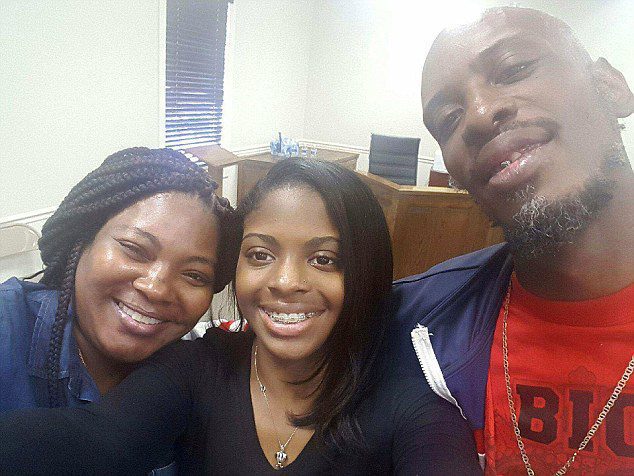 1st Family Photo: Kamiyah Mobley, 18, abducted at birth in the first picture provided by the family of her reunion with her mother Shanara Mobley and father Craig Aiken in Waterboro, SC.

“Reunited and it feels so good” for parents Shanara Mobley and Craig Aiken, 41. It’s long-awaited for them, but an unexpected one for their biological daughter, Kamiyah Mobley, 18, who was unaware that she was even missing. Kamiyah has spent her entire life introducing herself and answering to the name Alexis Kelli Manigo. This alias was given to her by Gloria Williams, who is currently in police custody in South Carolina awaiting extradition to Florida. Williams kidnapped Kamiyah from her birth mother Shanara Mobley’s arms at the University Medical Center in Jacksonville, Florida in July 1998. Williams posed as a nurse and took Kamiyah from Shanara, then 16, to have her examined for a fever.

Prior to the reunion with her biological parents, Kamiyah visited the only mom she’s ever known in jail. Kamiyah defended Williams on Facebook, saying she is “no felon.” During her last visit with Williams at a South Carolina detention center, Kamiyah is heard saying, “I love you momma.”Williams blew her a kiss.

She’d spoken with Shanara and Craig on Facetime and on Saturday, January 14, 2017, Kamiyah met her parents in South Carolina. The trio posed for a selfie and Kamiyah strongly resembles her father Craig. There’s no denying she’s finally home.

It’s hard to imagine losing a baby after only holding her in your arms for a few hours. Williams, a week prior to kidnapping Kamiyah, had suffered a miscarriage, according to reports.

Williams was a social worker. Kamiyah was located after a series of tips late last year to the National Center for Missing & Exploited Children, according to the sheriff. The FBI assisted in the investigation.

The kidnapping made national headlines and was an episode on “America’s Most Wanted.” Shanara sued and was awarded $1.5 million after settling a lawsuit against the former University Medical Center.