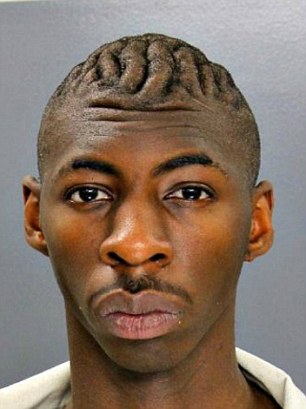 In November 2016, Rufus Gates, 17, pleaded guilty to robbing a child’s birthday party at gunpoint. He has been sentenced to five years, the maximum allowed under the Youthful Offender Act, which provides different options for young people convicted of certain nonviolent crimes in South Carolina.

The armed robbery took place at the Delta Motel in Santee, South Carolina, in December of 2015. Santee is located between Columbia and Charleston. In the motel room, four children and two adults were celebrating a birthday. Gates was arrested shortly after the armed robbery.

Dubbed “Prune Head,” he faced other charges including possession of a weapon during the commission of a violent crime, armed robbery and six counts of kidnapping, but they were later dismissed.

Gates’ accomplice, Alexander Lamar Outlaw, was earlier sentenced to 10 years in prison. Police say they pushed all the victims into a corner and demanded one man’s property.

Gates possibly suffers with a condition called cutis verticis gyrata, which is the “scalp manifesting as convoluted folds and furrows formed from thickened skin of the scalp” and this abnormality can cause “mental deficiency.”

According to the National Institutes of Health, it most commonly develops after puberty, but before age 30. It may worsen over time and is known to occur along with neuropsychiatric disorders, such as cerebral palsy, epilepsy, intellectual disability, schizophrenia, microcephaly (small head size), and seizures.

Once Gates’ mug shot was released by news outlets, his head became the subject of many prune and raisin jokes.