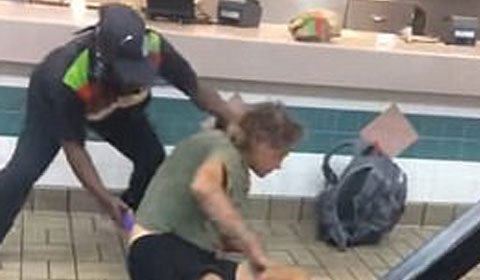 A racist customer at a Houston Burger King got more than a Whopper when he decided to verbally and physically assault employees while wrecking the restaurant. The unidentified customer challenged Black employees by yelling “Spray that s— n—–” and throwing cash registers to the ground as well as other items at workers.

One worker is then seen stepping up to the man and telling him to stop and calm down. That is when the out of control customer made the mistake of shoving the worker. Then all hell breaks loose as the customer is given a two-piece combo of fists by the enraged Burger King worker. The blows send the man falling to the floor stunned and trying to get up when a female worker comes from behind the counter and joins the action. The female worker warns her co-worker to step back because she is going to use her Taser. As the customer struggles to get up from the floor the fearless Burger King worker begins to use her Taser on his body. The man screams in pain and begins to crawl away and is kicked, slapped and called a ‘b—-‘ by the irate Burger King employees. Witnesses say the man was last seen getting on a bus and leaving the scene of the Burger King beef.