“I am not sure who told @kyliejenner and @kendalljenner that they had the right to do this,” Wallace captioned an image of one of the shirts with a giant red X emblazoned over it. 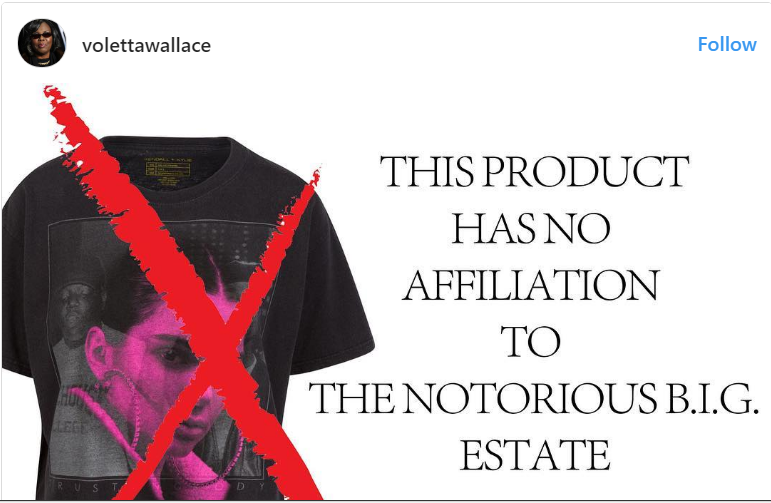 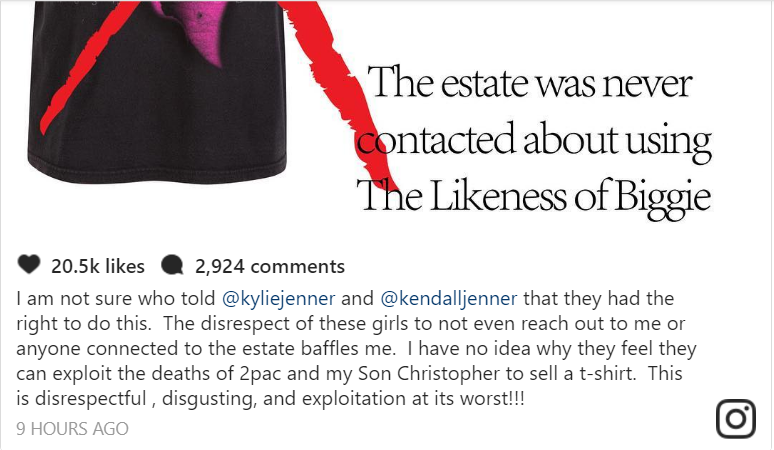 According to TMZ, Wallace’s lawyer, Julian Petty, also sent a cease-and-desist letter to the Jenners.

Sharon Osbourne, whose husband, Ozzy Osbourne, also had his likeness featured on one of the T-shirts, took aim at the Jenner sisters as well with a scathing tweet.

“Girls, you haven’t earned the right to put your face with musical icons,” she tweeted Thursday. “Stick to what you know … lip gloss.”

Girls, you haven’t earned the right to put your face with musical icons. Stick to what you know…lip gloss. pic.twitter.com/BhmuUVrDBn

The T-shirts in question were unveiled on the sisters’ Kendall & Kylie online shop Wednesday, and featured images of Tupac Shakur, Biggie Smalls, Black Sabbath, Metallica, Pink Floyd, the Doors, Kiss and Led Zeppelin overlaid with Instagram shots of the model/reality star siblings; they retailed for $125 and had the words “Repurposed in the USA” printed on each. The reality stars have since removed the products from their site.

Reps for Metallica, Pink Floyd, Kiss and Led Zeppelin and the Shakur estate did not immediately respond to requests for comment.

On Thursday afternoon, Kendall and Kylie Jenner posted identical messages to Twitter apologizing for the theft:

“These designs were not well thought out and we deeply apologize to anyone that has been upset and/or offended, especially to the families of the artists. We are huge fans of their music and it was not our intention to disrespect these cultural icons in anyway [sic]. The tee shirts have been pulled from retail and all images have been removed. We will use this as an opportunity to learn from these mistakes and again, we are very sorry.”

Kylie and Kendall’s misstep is only the latest in a long string of problematic marketing and business decisions plaguing the Kardashian-Jenner family.

Earlier this month, Kim Kardashian came under fire for ads for her new contouring kits, which featured a decidedly darker-skinned Kardashian. Critics slammed Kim for trying to hawk her beauty products by using blackface, an accusation that Kim sidestepped.

“I would obviously never want to offend anyone. I used an amazing photographer and a team of people. I was really tan when we shot the images, and it might be that the contrast was off,” she told the New York Times. “But I showed the image to many people, to many in the business. No one brought that to our attention. No one mentioned it.”

Khloe Kardashian faced her own controversy earlier this month too, after fashion designer Destiney Bleu accused her of copying her bedazzled clothing designs for her new Good American collection (with email receipts to back her up). Khloe roundly denied the claims, calling Bleu’s accusations “little more than a cheap publicity stunt.”

Less drama-prone sister Kendall caused an uproar — and an SNL skit — in April after the model starred in a TV ad for Pepsi that cheapened the Black Lives Matter movement.

“Pepsi was trying to project a global message of unity, peace and understanding. Clearly, we missed the mark, and we apologize,” Pepsi wrote in a statement at the time. “We did not intend to make light of any serious issue. We are removing the content and halting any further rollout. We also apologize for putting Kendall Jenner in this position.”

The commercial has since been pulled off the air.