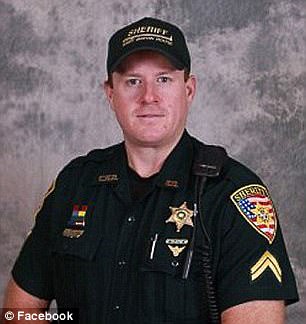 Deputy Nicholas Tullie was shot on July 17, 2016, by Gavin Eugene Long, who shot six police officers in Baton Rouge, Louisiana, in the wake of the shooting of unarmed 37-year-old Alton Sterling by White cops. Long killed three officers and three survived. Long, who was honorably discharged from the Marines, was shot dead on his 29th birthday by a SWAT team member around 10 minutes after the mass shooting began.

The Black Lives Matter movement and five of its leaders are being blamed for the deadly ambush against the cops.

Tullier, 42, suffered severe brain damage in the attack. A father of two, he was shot in the head, shoulder and neck, and was left in a vegetative state. He has since regained consciousness, some motor control and can now communicate non-verbally.

DeRay Mckesson and four other defendants are accused in the federal lawsuit that was filed on Friday, July 7, 2017, on behalf of one of the officers wounded on July 17, 2016.

The attorneys representing Tullier previously sued Black Lives Matter and Mckesson on behalf of a Baton Rouge police officer who was injured at a protest over a deadly police shooting last July.

“This is quite a world,” Mckesson told a reporter informed him of the latest lawsuit.

The lawsuit alleges Mckesson was “in charge of” a July 9 protest that “turned into a riot,” he “did nothing to calm the crowd and, instead, he incited the violence” on behalf of Black Lives Matter and leaders incited others to harm police “in retaliation for the death of Black men killed by police” and “all but too late” began to denounce the shootings of police after the Baton Rouge attack.

“Obviously, at this point talk show hosts were holding them responsible, and they were having to defend the blame and responsibility for what they had caused whether in whole or in part,” the suit says.