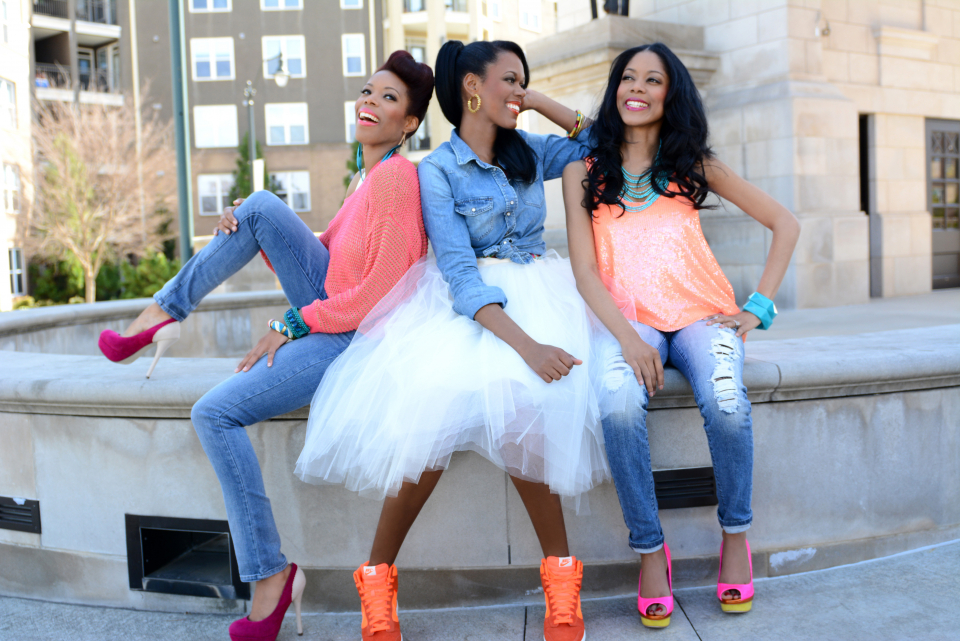 The Revelation of V3: “Three, the divine number of perfection and completeness” “God chose Latoya, Sacha, and Shelley to be one yet three. We are divinely entire and complete, we are unique and there shall be victory when we sing!” (V3)

Atlanta’s own Stellar and Dove Award nominees and recording artists V3’s brand new album, ALIVE!, was featured No. 7 on the Billboard Hot Single’s Sales Chart. ALIVE is a powerful project designed to uplift, inspire, and encourage souls around the world.

Rolling out caught up with one of the sisters, Shelley, who gave us more insight on the popular group.

When did you know that being a musician was your calling?
We have literally been singing all of our lives, but we really didn’t start to take it seriously until we were teenagers. We knew we had a gift and we wanted to sing. But, we didn’t truly understand what we had been called by God to do in the music business until we were already in it.

Describe three other occupations you’ve held.
We’ve done retail jobs at clothing and shoe stores. We worked at Highpoint Christian Academy, which was the school at our church. We’ve also worked administratively at different medical offices.

What inspires you to perform?
We find inspiration in a lot of things. Our main inspiration comes from God and the music He has given us. We truly believe that we have a story to tell and that the experiences in life that we’ve had are going to help somebody get through whatever it is they’re going through. Everything that we’ve put into the music comes out when we’re on stage. It’s our chance to connect with people, identify with them and share our hearts with them.

What instruments, if any, do you play?
We played various instruments growing up. LaToya played the clarinet. Sacha played drums in the school band. I [Shelley] played the viola and piano. We don’t play as much as we used to, but we are taking up new things like guitar and still playing piano. We do play instruments when we write to get our ideas out and give producers an idea of where we wanna go with a particular song.

How would you describe your brand of music?
It’s like an R&B flavor with a bit of pop. Really, V3’s music is a mixture of everything we love. We’re not like “trendy artists.” We don’t necessarily go for whatever beat or sound is trending at the time. We just like making good lasting music that’s from the heart.

When you are on stage, what do you want to convey about your style?
Our fashion reflects our music in a lot of ways. We want to convey that we are real women just like our music is real. We’re very true to ourselves and who God created us to be. We’re not trying to sound like or look like anyone else. We want people to see that you don’t have to “try” to be something, just be who you are because you are dope the way that God made you!

Name three musicians who have influenced your approach to being a musician.
Our mom, Commissioned, BeBe and CeCe Winans [and] Andre Crouch.

Describe your creative process from concept to complete song.
The process is different for each song. Sometimes we may have ideas and start songs completely from scratch formulating the instrumentation from top to bottom and sometimes we may write from beats or tracks that people send us. LaToya will hear a beat and just come up with a whole song or sometimes Shelley may hear a beat and come up with a whole song. Sometimes songs come in dreams or just as we’re riding down the street. Whomever is feeling inspired at the time runs with the ball and then the other two kind of fill in the blanks with whatever is needed on a verse or a hook or a bridge. It’s definitely a team effort. We work very closely with our producers to make sure that the message and feeling of each song is properly conveyed.

How do you select your creative music partners to fashion your musical voice?
We select people that have incredible creative ears. It’s really important to us to have the right person for the right song. We know going in what each person that we chose to work with is capable of and we know who’s going to pull the best out of us and who we can get the best out of.

What advice would you give anyone preparing to enter the music business about publishing and management?
We would say to find great management that truly believes in your vision and executes what you want to see happen for your career. You need a manager that you can trust and that will fight for you. Keep as much if not all of your publishing! Artist nowadays don’t own their own music and the great thing about being an independent artist is that you can own the rights to your music and the revenue is yours.

If you were going to sing for any famous person as a celebration of what they have done for humanity, who would it be?
There have been a lot of people who have done phenomenal things for mankind throughout the years so it’s hard to pick one person. Whenever God gives us another chance to sing we consider it an honor! But if we had to name anyone at this point, it would be the Obamas; they represented people of color at the highest level globally with style and grace.

What are the effects to society that you would like the results of listening to your music to be?
After hearing our music our prayer is that people will be inspired to hope. We want people to know that there is an answer to every problem and that answer is Jesus Christ, He is love and we pray that our society will start to show more of that!

If you could go outside the USA to write and produce music, what country would you choose and why?
We would gladly go to the Caribbean. The islands are so beautiful and the people are so welcoming and full of life. It’s a great environment for creativity and inspiration.

What do you like the most about being a musician?
The ability to express ourselves, tell stories and convey messages of hope through various styles of music.

What producers are you looking forward to working with soon?
No one in particular really. We like to work with up and coming producers and people that really care about creating lasting music

Name three musicians you would like to record with that are hitmakers.
Kirk Franklin, Josiah Bell, Diane Warren

If you could make a duet with someone who would it be and why?
Jonathan McReynolds because we love his sound! His voice is amazing and we like that he has his own style musically.

What musical achievements have you yet to obtain?
We would love to win a Grammy, a Stellar or a Dove award! We would also love to have our songs be number one on the charts!

Finish the sentence
When I hit the stage I feel…A little nervous, but also super excited and blessed to be able to do what we love and inspire and uplift people at the same time.
When the crowd is responding to my music I know…that I am where I’m supposed to be and I’m doing what I’m called to do.
I appreciate my fans because…Without their undying love and support we wouldn’t be able to keep doing what we’re doing.
Music is my calling…and we don’t take that for granted.
My method of studying music is…to always be ready and willing to learn and be willing to try new things
When you find my music I want you to…play it loud and let the words encourage you and give you hope!

Name your favorite two books. The Bible, The Color Purple by Alice Walker, Draw The Circle by Mark Batterson