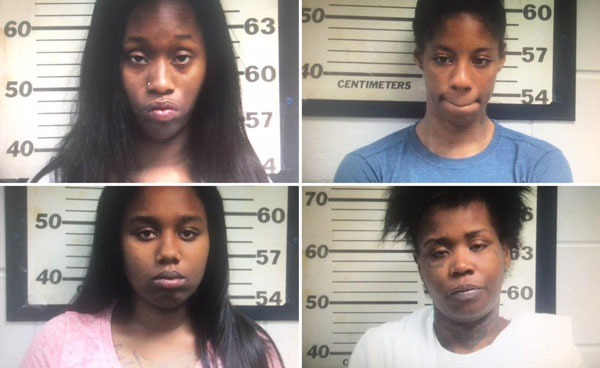 A good deed on behalf of four stranded strippers has cost a Missouri man his life. Rufus Cross, 55, of Wilson City, Missouri encountered Brittany Curry, 28, Ponesha Taylor, 23, Johniesha Simmons, 19, and Lauteshia Dotson, 23, at a local gas station. The women apparently were stranded and two of them were from Nashville and Memphis, Tennessee. According to a homicide investigators in the Mississippi County Sheriff’s Office, Cross offered to help the young women and they accepted. It was reported that Cross purchased a new tire for their vehicle, worked on the car and allowed the women to stay at his home for at least three days. Local media outlet Fox 13 reported that witnesses claim they saw Cross arguing with three of the women outside his home and that another woman was waiting in a white car. Cross and the women went inside the home and soon a witness stated they heard a loud bang. The three women then left the home, got into the car and one was heard to remark, “He trippin don’t go back down there” and then left the scene.

Cross’ body was discovered by police on August 1, 2017, and police began looking for the four women. Cross was shot in the back with a 9mm pistol and his pockets were turned inside out. In addition, his house was ransacked and police determined that robbery was a motive. Neighbors described Cross as well liked and constantly helping people including total strangers by purchasing school supplies, and gas for those in need. It was also reported that he was last seen with a large wad of folded bills, which police have stated is missing.

Surveillance footage showed the women together at a gas station convenience store the night Cross met them and soon police were able to track the women down. Investigators learned that the women were in southeast Missouri after advertising escort services online.

All four women have been charged with first-degree murder, armed criminal action and unlawful use of a weapon in connection with Ralph Cross’s murder.