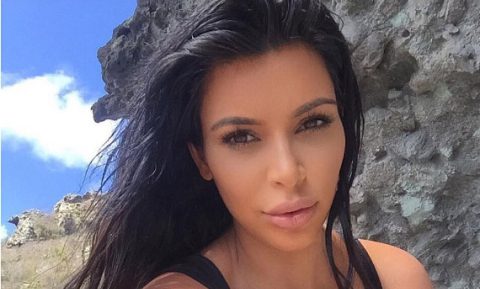 Kardashian was speaking about Star who was caught on video using racial slurs. Star was captured calling someone the N-word and ape. There are other instances where he called Blacks rats and roaches. Star eventually became a successful YouTube personality within a year and has millions of followers. Once he became famous, Star apologized for his racist views and claimed that he grew from the incident.

In her Snapchat video, Kardashian told her fans to forgive Star. I get it’s a serious deal if you say racial things, but I do believe in people changing and people that apologize, I will give them the benefit of the doubt,” she said in the video. “I know better than anyone that I hate when people bring up my past or mistakes I’ve made in the past. So let him live.”

Kardashian also posted another video where she said, “I want to make one last thing clear, I do not defend people that are racist and I am very against it,” she said. “But if someone claims that they have changed, I would love to give them the benefit of the doubt and I pray to God that they do change for the sake of my children and my friends.”

The statement was irresponsible and proved that Kardashian lacked incite on race relations even with having a Black husband and kids.

Kardashian later apologized for defending Star. “I really wanted to apologize to you guys and my fans for defending a situation yesterday that I really didn’t know enough about,” she said. “I just feel a bit naïve and I do want to really apologize for me feeling like I had the right to say, ‘Get over it,’ in a situation that involves racism. I don’t really feel like I have the right to speak on that. I really am sorry and I just want to move forward and be positive.”

Telling people, especially those of color, to get over racism is like telling a person with anxiety to stop worrying. Come on Kim K. 🙄

Would Kim K forgive the person who racially attacked her child or does she believe that if its not hers it’s not a problem.

Lol Kim K really related racism with makeup…..in what universe is she in😒

KIM K IS AN example is that she wants to LAY UP WITH BLACK PEOPLE , but protects racist antics whenever she can ..

If it’s not directly to Kim K, she don’t care. She won’t care until Saint gets older and he gets treated differently for being a BLACK man.