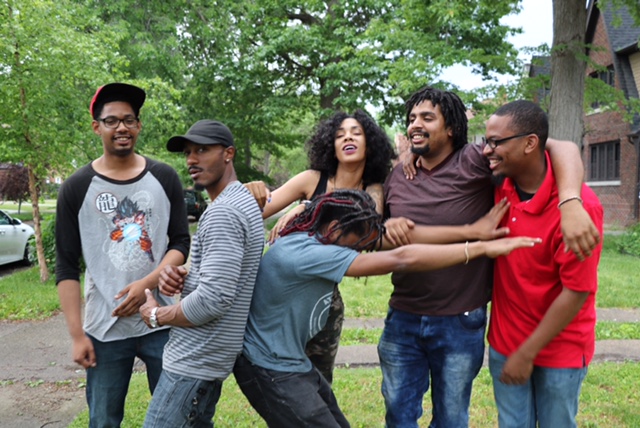 Rosie and The Fellas are introducing a new, fresh sound to the city of Detroit and abroad. Detroit media mogul Randi Rossario and fellow band members True Animal, Corey Dunn, Mitch Kidd and DJ Nemo Beatz have collated as one to bring new vibes to listeners and inject positivity into the universe through their music.

On how Rosie and The Fellas came together as a group:
Randi Rossario: Everyone in the group is family, from top to bottom. We put out a single last year called “Pop Shop” and it did pretty good, but it wasn’t received the way we thought it would be received. “Pop Shop” was supposed to clear everyone’s mind of “Randi the rapper” and introduce Rosie and The Fellas, which it did, and we’ve been working on our sound since then.

On the synergy that exists between the group members:
RR: We definitely have a great amount of energy that exists between all of us. We use that as a foundation to build. We also use the fact that we’re a family to our advantage. We really love each other and that same love isn’t forced at all. When we put on a show, people automatically will feel that genuine energy. That’s what sets us apart from everyone else.

On the grind of being in a band:
True Animal: It starts with actually wanting to be great. Being in a band is a full-time job so you have to stay focused at all times because if you don’t, it won’t work at all.

Corey Dunn: Hard work pays off as well. You’re always one move or one song away from your big break.

On the visual direction of the video for “Caught In A Trap”:
RR: It’s important for us to put out good energy into the world, which is what we provide in the video. That’s our main objective within this group. Even though the song is about heartbreak, the video doesn’t have to be depressing or sad. You still have to have a positive outlook on life no matter what.

Check out the video for Caught In A Trap on YouTube.