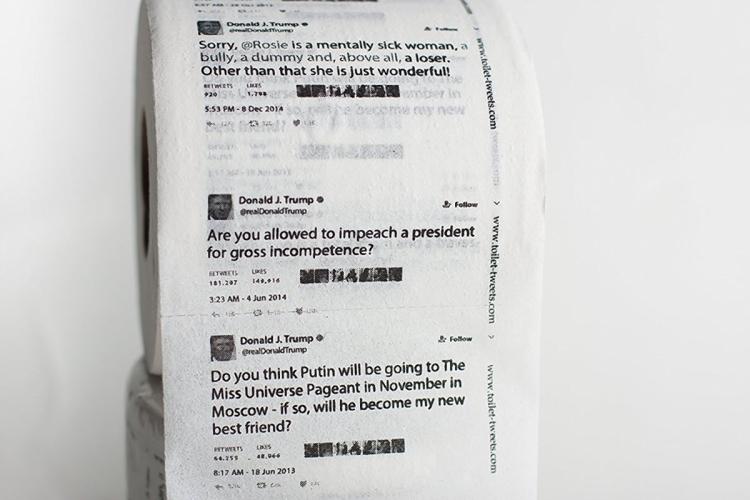 President Donald Trump’s quotes are really causing a stink an America’s toilets are flushing at a record pace. That’s because a company called Toilet Tweets has sold out of its toilet paper covered with Donald Trump’s most controversial tweets.

The two-ply product, which was selling for $11.99 on Amazon, is now listed as “currently unavailable” on the e-commerce site.

Similar rolls are still being sold on Amazon by a third-party vendor called American Art Classics, reports the New York Daily News. The site also notes that “similar products exist of Barack Obama” but they don’t sell as well.

“No twitter feed is as deserving of being flushed, it’s tremendous,” a description on Toilet Tweets reads. “I’m hearing other toilet papers don’t even have words on them, SAD! This toilet paper has the best words.”

The Trump toilet paper features screen grabs of tweets from before Trump took office in January, including “Are you allowed to impeach a president for gross incompetence?” from June 4, 2014, and, “Do you think Putin will be going to the Miss Universe Pageant in November in Moscow? — if so, will he become my new best friend?” from June 18, 2013.

There are also old tweets in which Trump took shots at celebrities, Rosie O’Donnell and Bette Midler.

Is Fake News Washington Post being used as a lobbyist weapon against Congress to keep Politicians from looking into Amazon no-tax monopoly?

Trump, as we all know, has an extremely long list of adversaries and arch-enemies whom he has harangued, condemned or tried to destroy, particularly those within the political realm. It is a list that is too long to enumerate here but could, well, take up an entire roll of toilet paper.