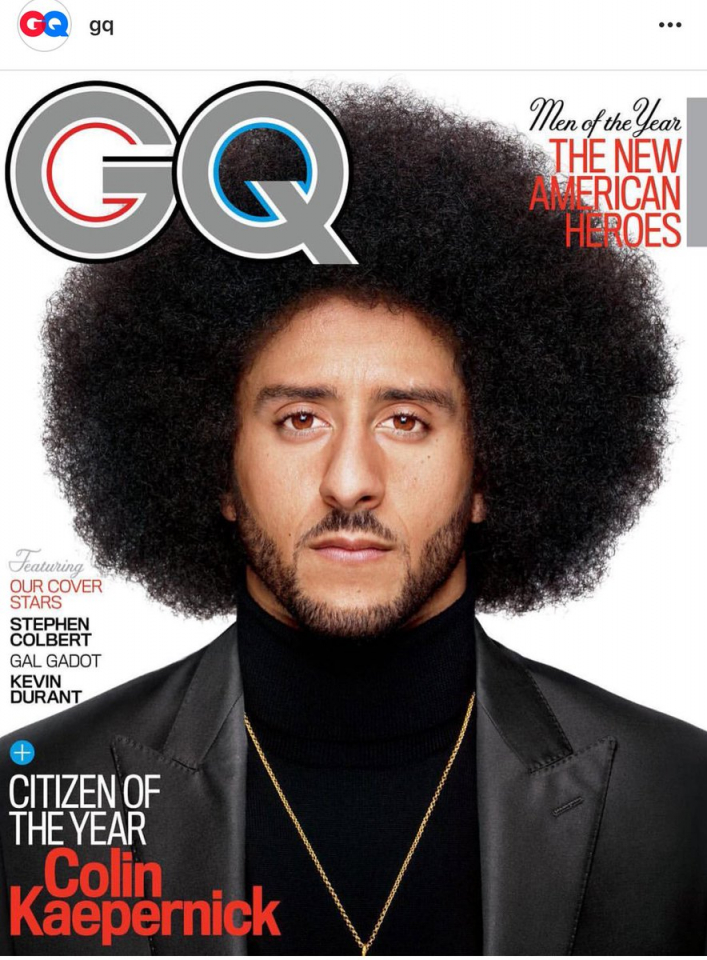 The fired ESPN reporter bashed GQ and Kaepernick on Twitter Monday shortly after the magazine announced it would be honoring the cultural lightning rod of a quarterback.

“Wear socks depicting police officers as pigs; wear Fidel Castro as a fashion statement IN MIAMI; sue NFL for collusion when gf compares owners to slave owners…Win Citizen of the Year. Serve in the US military…nothing. What a joke, GQ. #Kaepernick,” McHenry wrote on Twitter.

McHenry has accrued a lot of right-wing “cool points” for criticizing Kaepernick the past year for initiating the national anthem protest movement.

McHenry, now a frequent guest on Fox News where she often spews anti-Black diatribes, was one of 100 ESPN employees let go by the network in late April. She still believes her conservative views had something to do with her termination.

GQ decided to honor Kaepernick due to his activism, both on-and-off the field.

“Colin Kaepernick’s determined stand puts him in rare company in sports history: Muhammad Ali, Jackie Robinson – athletes who risked everything to make a difference,” the editors of GQ wrote. McHenry later said she does, in fact, understand the underlying reason behind the protests, but believes players such as Malcolm Jenkins and Kenny Stills were more worthy choices.

“For those who think I don’t get the reason for protest you’re wrong,” McHenry wrote. “Eagles Malcolm Jenkins met with lawmakers to help community. Dolphins Kenny Stills met with Miami police. More examples of Citizen of the Year.”

“JJ Watt raised $37 million for Hurricane Harvey victims. 37 MILLION! But Kaepernick refused to stand for our national anthem (a year ago) and is Citizen of the Year. Right…,” McHenry wrote.

While McHenry praised Jenkins, Stills and Watt for their contributions off the field, she failed to acknowledge Kaepernick’s.

Kaepernick, the former 49ers quarterback, has donated his time and money to the community and has volunteered across the country. Kaepernick has also donated $1M plus all the proceeds of his jersey sales from the 2016 season to “organizations working in oppressed communities.”

Kaepernick founded the Know Your Rights Camp, a youth campaign which strives to raise awareness regarding higher education, self-empowerment and how to properly interact with law enforcement.

McHenry detractors, and there are many, blasted the reporter for her narrow-mindedness, sanctimonious self-righteousness and believing that Kaepernick and others do not have the right to exercise their 1st Amendment rights in the manner they have.

Here is a sampling of the McHenry blasting:

#BrittMcHenry…you talk a lot of s**t abt the NFL…How abt reporting of #DeShawnWatson give away 1st paycheck to flood victims. https://t.co/HzljgiTCqO

“Trolls” show up & hold a mirror up to Barbie.It’s not an unmerited effort.It counter balances the lies #BrittMcHenry tells herself nightly.

Not surprised nor should any of us really be. Devils support devils. The demonic system of #WhiteSupremacy is upheld by the likes of #BrittMcHenry & various others,etc,etc.