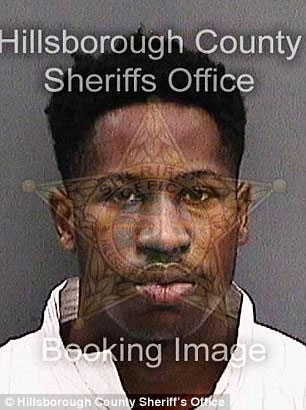 The city of Tampa, Florida, can breathe a sigh of relief after police announced the capture of a suspect in four homicides. Police say that Howell Donaldson, 24, is responsible for a total of four known murders in the Tampa area.

Florida news outlet WFLA, reported that Donaldson was arrested based on a tip from the manager of his job at a local McDonald’s. According to police, Donaldson arrived at work in uniform and had asked a co-worker to hold onto a 9mm handgun. He then left the restaurant to go to a nearby payday loan store. The concerned McDonald’s employee alerted an off-duty police officer who called for backup and waited for Donaldson to return. When he returned, police took him into custody for questioning and he was later charged with four counts of murder in the deaths of Benjamin Mitchell, 22, Monica Hoffa, 32, Anthony Naiboa, 20, and Ronald Felton, 60. All of the victims lived in the community and they were seemingly chosen at random.

Police received more than 5K tips since the first murder occurred almost 51 days ago. Police Chief Brian Dugan would not state whether the gun seized by police was the actual murder weapon. The hunt for the serial killer was intense and included a heavy street presence by police and the escorting of trick or treaters on Halloween as the city was on edge. At this time there is no word on why Donaldson allegedly killed four innocent people going about their daily lives.