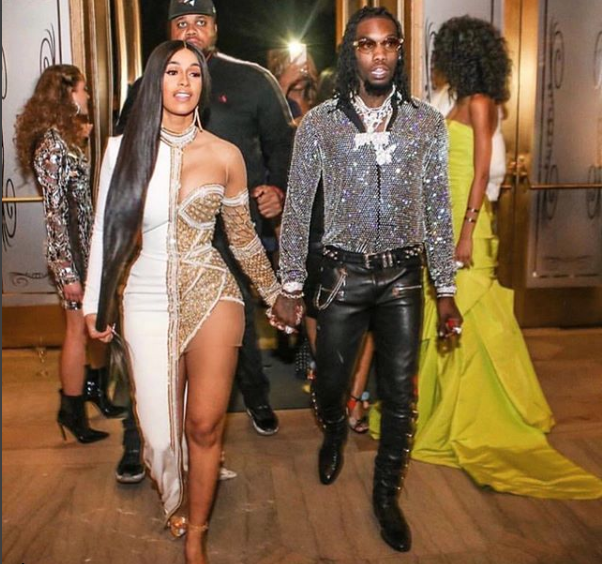 Cardi B is not only killing the game right now, she is lapping the entire field.

The “Bodak Yellow” singer is shutting down 2017 the way she started the summer – on fire – with her new single, “Bartier Cardi,” featuring rapper 21 Savage. The track is punctuated with shout-outs to her fiancé, Offset of star rap group Migos, as well as the Louboutin shoes she referenced on “Bodak.”

Earlier this year, Cardi became the first solo female rapper to score a No. 1 on Billboard‘s Hot 100 in nearly two decades (Lauryn Hill’s “That Thang” in 1998). More recently, she became the first woman to ever have her first three official singles — “Bodak Yellow,” the G-Eazy collaboration “No Limit,” and the Migos team-up “MotorSport”— break the top 10 on the Hot R&B/Hip-Hop Songs chart.

Furthermore, “Bodak Yellow” also made it to Entertainment Weekly’s best songs of 2017 list, landing at No. 8.

With “Bartier Cardi” the stripper-turned-reality-star-turned-rapper showcases her love of diamonds, sports cars and romance on her sex-tinged new single. The Bronx-born and bred rap princess unfurls a series of triplet rhythms over a minimal trap beat and eerie synth chords, rhyming, “Your b**** wanna party with Cardi/ Cartier Bardi in a ‘Rari/ Diamonds all over my body/ ‘Shinin’ all over my body/ Cardi got your b**** on molly.” 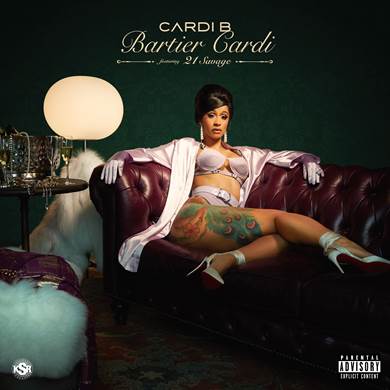 Cardi B, who already scooped up a collection of BET awards, recently earned Grammy nods for Best Rap Performance and Best Rap Song for the 2018 ceremony. Coincidentally, the 2018 Grammy Awards, which are usually aired from the Los Angeles-Beverly Hills area, will be shown on the neighboring borough (Manhattan) from where she grew up (Bronx) in New York City.

Though she’s yet to unveil all the details of her official debut album, Cardi B has been especially active with guest spots in recent months, teaming with Offset (“Um Yea”), Juicy J (“Kamasutra”) Nicki Minaj and Migos (“MotorSport”), G-Eazy (“No Limit”) and reggaeton artist Ozuna (“La Modelo”).

The Grammy nominated rapper admitted to Rolling Stone that the explosive success of “Bodak Yellow” has given her trepidation about the follow up singles to come.

“I got six, seven solid songs that I like, but I wonder if a month from now, I’m going to change my mind,” she said. “It’s not as fun to do music. My mind doesn’t flow as free ’cause I have so much on my mind.”