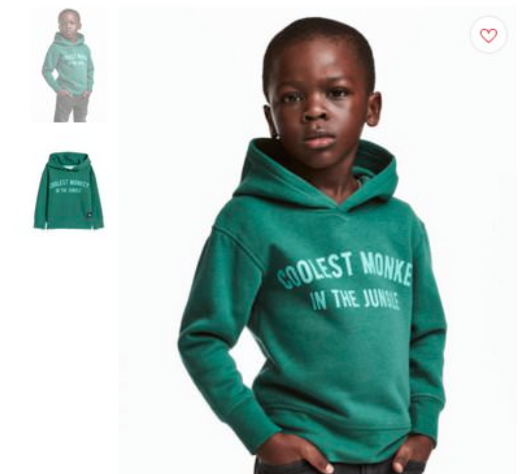 H&M has become the latest major brand to catch flack over a racially insensitive ad. The Swedish clothing company posted an advertisement that featured a sale for their kids’ line.

In one ad, a Black child is wearing a shirt with the words, “Coolest Monkey in the Jungle” printed across the front. The ad serves as another example of how a lack of diversity at ad agencies can lead to insensitive messages. It also reveals how each person who was responsible for the ad did not think twice about why it would be viewed as improper by the public.

Recently, Dove faced criticism for also running a racially charged ad. In the ad, a Black woman removed her brown shirt and became clean after somehow turning into a White woman. The ad was ridiculous and racist. It was blasted on social media and Dove’s owner, Unilever, eventually apologized. In a statement, the company wrote, “Dove is committed to representing the beauty of diversity. In an image we posted this week, we missed the mark in thoughtfully representing women of color and we deeply regret the offense that it has caused.”

H&M has since apologizes for the ad. However, the company is facing severe backlash on social media.

So this is how H&M responds and tries correcting accusations of their lack of diversity in their campaigns.@tumisole@PhilMphela pic.twitter.com/tHKabXLMom

Anti black advertising never seems to learn. Did you not run this by anyone Black? Or with common sense? @hm needs to do better. Until then, myself and others will drag you. pic.twitter.com/QA3mFl4OIo

Soooo @hm @hm_man this is cool!!??? H&M shoppers what do you think of this!? I don’t shop there, i won’t shop there and never will wear items from there! This is in TERRIBLE taste! REMOVE THIS! @hm pic.twitter.com/VPHICCxIlb

Welp. H&M is cancelled. No more shopping from there. #CoolestMonkeyInTheJungle

I’m struggling to find the words needed to express what I want to say. 2018 and these sublims are still creeping in? @hm pic.twitter.com/9lYD7MGffV