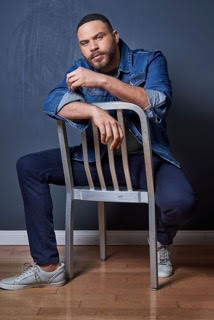 Ian Verdun is making a big impact in Hollywood.

A writer, producer and avid lover of the arts with over 10 years of sharpening his craft, Verdun is set to showcase his diverse skill set as Xander McClure on Freeform’s “Siren,” the network’s upcoming sci-fi thriller about the fishing town of Bristol Cove and the supernatural occurrences of mermaids in the town.

Rolling out caught up with Verdun to talk about his passion for the arts and how he plans to use them to narrate stories of the often forgotten.

How did you get into acting?

The first thing I did was a play when I was 13 years old. I was in junior high and it was just a school play. We did a theatrical version of Disney’s Mulan. I’ve always been an artistic kid. I’ve written, I used to draw, make pop-up books. I was in every musical in high school. I went to California Institute of the Arts, I studied in England, and in Oxford for acting. It’s been a lifelong dream of mine. I come from super humble beginnings. Doing this was something that was completely outside of the realm of things that so many people thought was possible. I just had a lot of support, and even though we didn’t have a lot of money, my family just made it happen.

“Siren” is the first show of its kind on Freeform. Talk about that and your character, Xander.

Siren is about a small town called Crystal Cove where many people believe in the historic stories of mermaids. This woman comes ashore and starts proving all the stories true. My character Xander is a native of Crystal Cove and a fisherman. He works for his father who owns a small parlor. They are Super blue collar people, working paycheck to paycheck. I feel like Xander’s lens is very different from the other characters, like Finn and Maddie, who are coming from a very, almost altruistic standpoint. Xander’s priorities are very different. I think that the way that he approaches the greatness that starts to happen is, for me, relatable. I think he’s an incredibly flawed character, but something about him that I just identify with. Even when he makes bad decisions. None of us are perfect; we all make mistakes. All of us are a bit beholding to our perspective and sometimes it’s hard to get out of that. So, it’s nice to be able to represent that.

You’re a writer and you’ve helped produce shows. How does writing and producing help you with your acting, and vice versa?

Before “Siren” came along, I was working on my show “Life’s a Drag,” which I’m still working on. I graduated college back in 2007, so I’ve been on that hustle for about 10 years now and while I was in the thick of it, I got to this point where I was like you know what, I have to stop waiting for people to give me opportunities. I have to start creating it, and I have to start creating opportunities for other people. I’m a big fan of diverse narrative[s] and full-on representation, and I felt like I wasn’t doing the work to actively add those stories and put them out into the world. It was important for me not to just be a passive participant in my career. With “Life’s a Drag,” I knew if I [was] going to write things, I needed to be able to showcase what I’m capable of. I did that, and I was able to challenge myself. In “Life’s a Drag” I was a playing a drag queen. I wanted to be able to show that I have the ability to transform and I love transforming and I love embracing different experiences from what is opposite of me. It’s also liberating to feel that I’ve never done it before this. It was nice to be able to shed the expected masculinity and explore the side of those feminine aspects that I think everybody has, whether or not people want to believe it or not. With writing and producing, not only are you creating opportunities for other people who are in your circle and that also deserve their voices and talent to be seen, you’re able to push your own boundaries and explore new things for yourself.

What is your overall goal while you’re in Hollywood?

I have a lot of goals. I think I’m pretty capable of a lot of different things, especially in terms of art. I have to take a step back and look at the people who have been able to break open this world of representation, diversity, and inclusion and reality, into our media. I want to be able to do, as a writer and a producer, those things. To make sure there’s centered narratives on women, people of color, and LGBT perspectives, and to let people know there are many different perspectives within each of those communities. There [are] possibilities, perspectives, and stories that just have not been explored. We’ve been telling the same story over and over again for like a century. If there’s anything that I can contribute, it would be to genuinely look at the world that I come up in and my perspective, which is that of somebody who has a specific perspective from Black America, the West Coast, and poverty. Those are narratives that are important for me to create. If I can reach back and create a ripple effect and open something up for the kids, how much more would be possible? How many stories will come up that have been shunned? It’s a beautiful opportunity and an interesting question to look back on. So many real people have been lost in time because there have been no opportunities because there’s been so much oppression and so many vital barriers to unlocking [the] full view and potential of everyone on this planet.