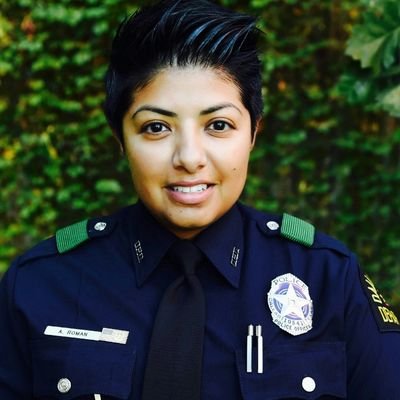 “I don’t do anything halfway. When I take on something, it’s personal to me,” stated Dallas Police Department’s newly appointed LGBT Liaison.

In February 2018, the Dallas Police Department appointed Amber Roman as the new LGBT Liaison & Community Engagement officer. Officer Roman is also the first woman of color to hold the role.

“The conversation was had that we need to bring in someone new because Dallas is so diverse. I was fortunate enough to be that person,” said Roman.

Roman said growing up in Dallas and being openly gay, she saw the division that exists in communities and sometimes families.

“People assume under the blanket of LGBT, everyone’s all together and loving and happy. That’s just not the case,” she said. “There are many secular groups in the LGBT community.”

It’s those same divisions that exist in the city of Dallas, particularly North and South Dallas, that Roman aims to address with a focus on South Dallas. Roman said there’s a contrast with issues minorities and the LGBT community face in North Dallas compared to South Dallas.

“My two top priorities for the year are having a voice and bringing a face to the issues in the South Dallas community — including our youth,” she said.

Roman said she feels a better job can be done in serving the youth and including them in discussions so they can get to know her and trust the police department has someone who’s on their side. She’s laying a foundation by getting out to various public events, such as the recent 2018 AIDS Walk South Dallas.

She also has sit-downs with the people who feel like they can’t report a crime because they feel “nobody will care.”

“For example, a lot of transgender people and citizens feel like they can’t trust the police department or they won’t be believed by the police. So much crime is under reported within our community and that breaks my heart. If people aren’t getting to know they can contact me or if I’m not making these connections in the community, I’m doing a disservice.”

Roman said when people assume the police don’t care or if there’s a breakdown in communication and trust they see events like July 7, 2016, when a gunman ambushed and fired upon a group of police officers in Dallas, Texas, killing five officers and injuring nine others.

“Trust has been eroded. Without the communication, we can’t be successful,” she said. “It’s a working relationship.”

Roman said she’s happy about the improvements happening around Dallas when it comes to communication and diversity, including the appointment of Renee Hall, the first female chief of the Dallas Police Department.

“I feel some things are destined. It’s hard to envision myself as an officer anywhere but Dallas. And I feel a huge sense of responsibility to affect some change in the city I grew up in and that I love,” she said.

The city Roman loves will afford her many opportunities to serve as a voice for the community in the coming months. She says the role of LGBT liaison is more than just a position. “It’s my life,” she said. “Hopefully, when little boys and girls see me, they see anything is possible. I’m excited.” -t. harris