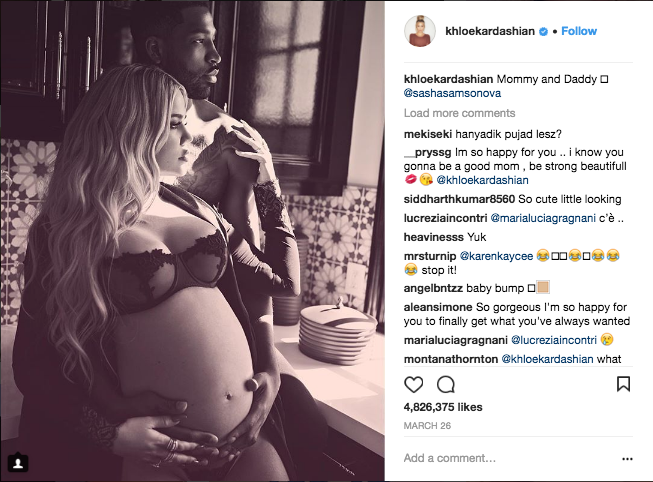 Early Thursday, April 12, Khloe Kardashian, 33, gave birth to her first child. Mom Kris Jenner had this to say on Twitter: “BLESSED!!! #Repost @wmag ・・・
When three of your sisters give birth in under a year. Congratulations to @KhloeKardashian on welcoming another girl to the KarJenner clan.”

Earlier this week, Kardashian’s disposition was of concern to many when a cheating scandal broke on both Daily Mail and TMZ. Her baby’s daddy, Cleveland Cavalier’s power forward Tristan Thompson, 27, was captured in a photo getting intimate with a woman at a club and in a video kissing a woman and motor boating her female companion while she groped him at the PH-D Lounge in New York City over the previous weekend and at the Darna hookah lounge outside of Washington, D.C., last October, respectively. The Shade Room posted a video of Thompson with the brunette at his hotel. 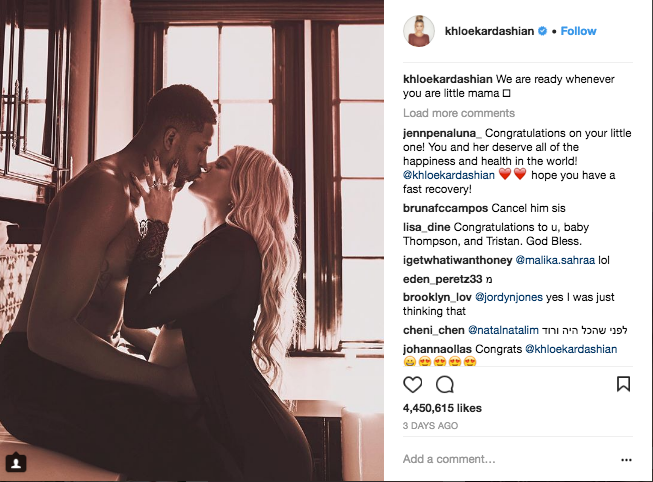 A source tells People the new mom is “is feeling nothing but happiness right now. She is head over heels in love with her” her daughter baby and “nothing else matters.”

The NBA player dubbed “Tristan Third Trimester Thompson” was booed on Wednesday, April 11, after news broke of his alleged multiple affairs. One woman even claimed she’s pregnant by the baller. He was given the “third trimester” moniker for leaving the mother of his first child, Jordan Craig, while she was in her third trimester of her pregnancy.

Thompson was seen leaving a Cleveland hospital on Thursday following the birth of his second child.