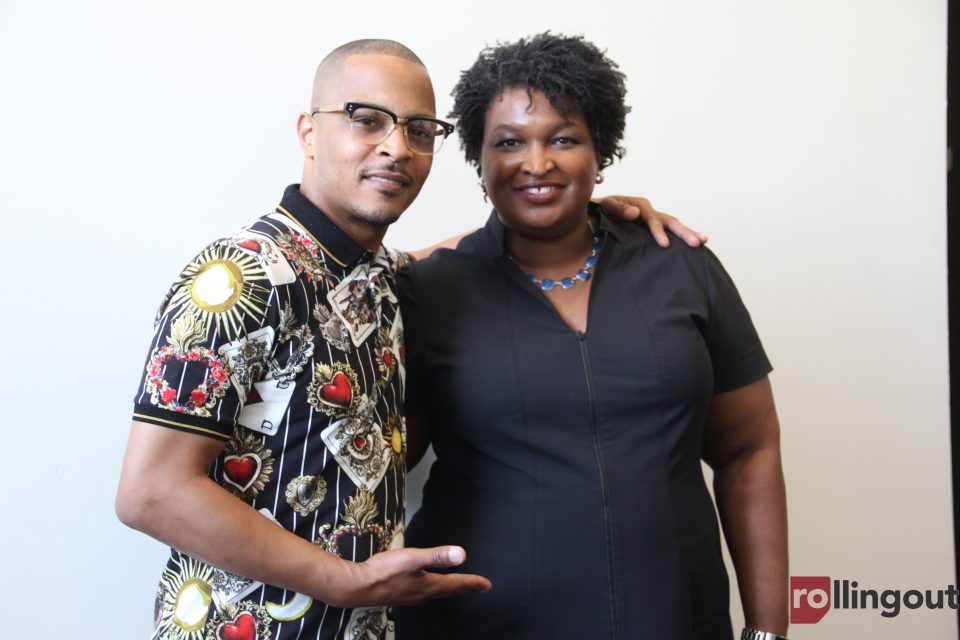 T.I. and Stacey Abrams have both made an impact in the state of Georgia. T.I. as a rapper and activist, and Abrams made a name in the political realm while serving as house minority leader for the Georgia General Assembly and state representative for the 89th House District.

Abrams seeks to become the first Black female in America to become governor and T.I. has her back.

The two recently held a discussion at The Gathering Spot which was moderated by Ryan Wilson. The two discussed criminal justice reform, affordable housing, and providing funding for small businesses.

Before the event T.I. shared why he believes Abrams will make history.

“I was impressed by her commitment and passion to the needs of the community,” he shared. “For any community to become self-sustaining. You must improve the education, the opportunities and experiences within the community. Leader Abrams has shown that she’s committed to both. And that’s why I’m here to support her…I’m very passionate about my community and would only align myself with the right person who is seeking a political office.”

On May 22, Abrams faced off against Stacy Evans for Georgia’s Democratic Primary. The race was not close. About an hour after polls closed in Georgia, Abrams was named as the winner by receiving over 75 percent of votes.

She will have an uphill battle to win the election in November due to Georgia being a red state. While metro Atlanta and some areas in South West, Georgia usually vote Democrat, the majority of rural areas in Georgia vote Republican. Abrams will have to convince those rural voters to go against convention to choose a Black woman. It will be a daunting task considering that some rural areas in Georgia embrace the divisive ideas of the old South.

She believes that her focus on providing more affordable housing and access to funding for small businesses will be key in the November election.

“Entrepreneurship is the backbone of how we start our dreams,” Abrams said before her conversation with T.I. “It’s also important to help small businesses thrive because it’s how we how help our communities. We want to make sure that every family has the opportunity to thrive.”

With the support of T.I. and others in the entertainment industry who have garnered national success, Abrams believes that Georgia’s arts and culture communities must also be commended for their work in arts and politics.

“The entertainment industry is one of major ways we generate revenue within the state [of Georgia],” Abrams said. “Entertainers should be taken seriously and they should be lauded for their engagement in politics.”

In the upcoming months, the nation will be looking to Georgia to be more than a place where movies are filmed and rap artists make it big. It will be viewed as a place that could solidify the dream of its hometown hero, Dr. Martin Luther King, Jr. By electing Abrams as the first Black female governor, it will be a pivotal moment in Georgia and the entire United States of America.