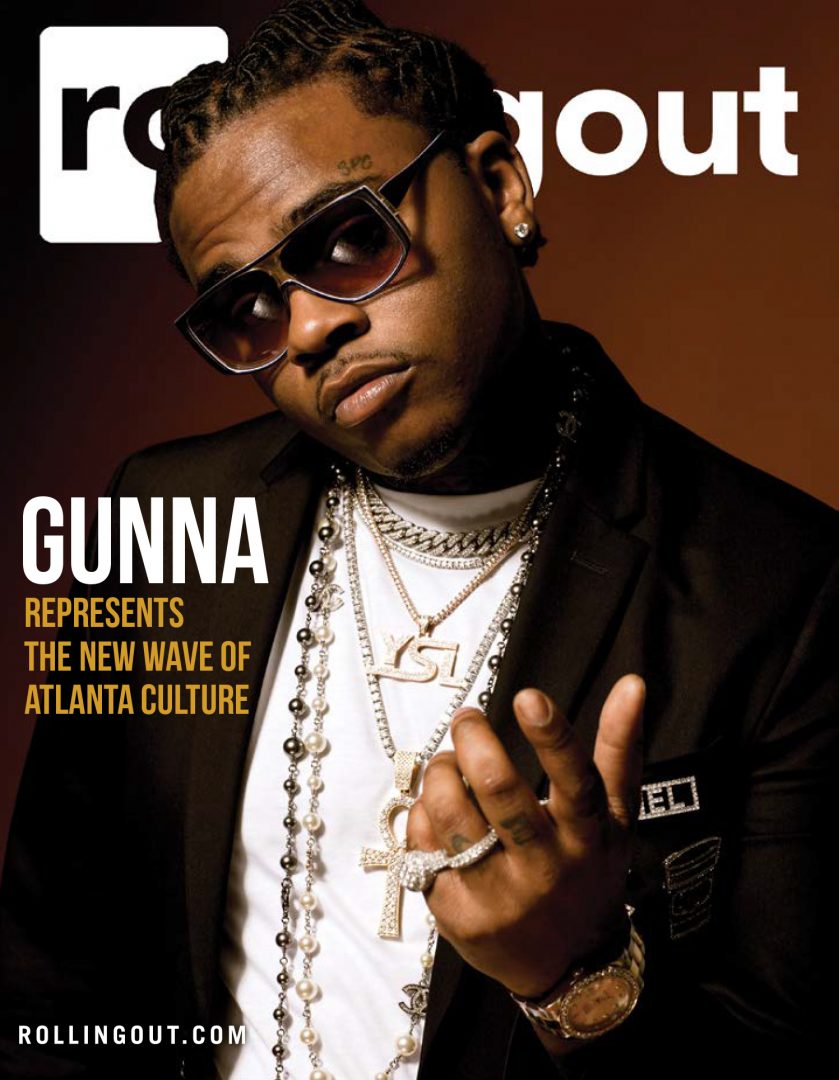 Atlanta produces cultural movements as if they are natural resources. The world looks to Atlanta to catch the next wave in terms of music, culture and style. In the words of cultural curator Bem Joiner, “Atlanta influences everything.”

Atlanta inspires the narrative of Black youth culture by lifting the next generation of creatives. Enter Gunna. The native of College Park, Georgia, a city in the metro Atlanta area, represents a new wave of Atlanta artists and producers who are keeping the city at the forefront.

Gunna gained notoriety in rap after being introduced by his mentor Keith Troup to Atlanta rapper Young Thug. Troup, 44, was shot to death at a gas station in College Park in 2015. Troup’s legacy lived on as Young Thug and Gunna would eventually collaborate on the hit song “Floyd Mayweather,” which also featured Gucci Mane and Travis Scott.

Gunna shares his come-up story and how he plans to take Atlanta culture to the next level.

What was life like for you before the Drip Season projects dropped?
I came from the Southside of Atlanta. It’s not in the city, so I came to the city and just started adapting and building relationships with certain people. I’m from Old National Highway and the Flat Shoals area. That’s like near the airport on the outskirts. It’s not in Atlanta. It’s College Park. So we got our own style and tradition. But all of us got that Atlanta tradition in us.

Some people only see the finished project when it comes to rap. What did it take to find success in rap?
Sacrifices and good decision making. You have to make your next move your best because you go through different obstacles on trying to pursue your career, and that’s in any career. I went through a lot, but as I went through it, I learned from the situations. I really had to go through it.

What is a misconception about you?
I try to be as humble as possible and try to project that to the world. But some people don’t see that. They think I’m just in Atlanta spending money. But I try to be humble. I try to let the world know that I am still humble. I appreciate every blessing.

How do you create in the studio?
I like to have pretty girls in the studio to kind of set the mood. We got them dim lights, you know what I’m saying? Good weed. Everybody just setting the vibe. It’s all about the vibe depending on where you are. I like Atlanta’s vibe. Then I go to L.A. It’s about getting a different feel. You can’t have that same feel because you’ll get the same music. You don’t want to hear the same thing.

You’re known for “drip.” What are your thoughts on other people trying to steal what you started?
I’m going to be 100. I’m switching it up. You got to be able to reinvent yourself and come up with new ideas because everybody is going to try to copy, which is what you want. You want people to start saying what you say. You don’t want people to not acknowledge it and you not reap the benefits. I’m cool with everybody saying drip or whatever I got going on. They’re trying to do it because that’s what I want. I don’t want you to not acknowledge it and not know about it and not try to do it. I want you to do that because I have plenty of it. I’ve got more stories.

How has Atlanta supported your movement?
Atlanta is very supportive, which is good. I wish more cities would support each other. It comes from your city getting behind you, pushing you, pushing your music out, and then that’s when the world will gravitate. Atlanta got behind me first before any other city.

How does it feel to represent the next wave of Atlanta rap?
Man, it’s a blessing. It’s a blessing to be in this position, and I got to make sure I’m staying on top of it. I’m happy and ready to see what we’re gonna do for the whole town. We give people Southern hospitality, you know what I’m saying? We show people from out of town a good time because they don’t know what’s up. That’s why a lot of people from out of town come to Atlanta. Atlanta just has a certain vibe.

What advice or encouragement would you give an up-and-coming artist?
You have to know what’s going to be your trademark. What do you stand for? What is your sound like? “What was his emoji?” … Break it down like, “What was his emoji?” That’s how you need to come in and think about how people will remember you. I know they’re gonna remember me from drip.