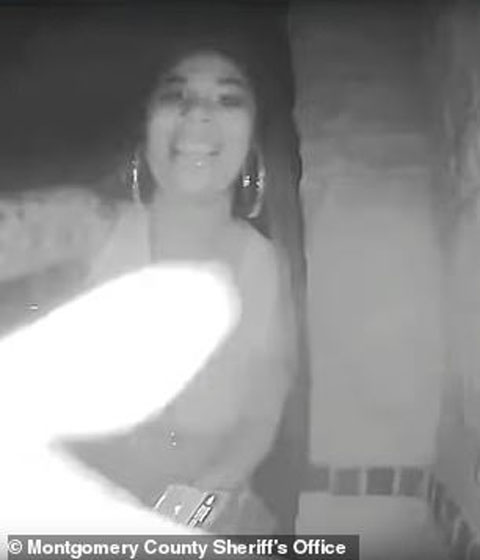 This video, which has gone viral, recorded a babysitter leaving a toddler at a stranger’s door (Image Source: Montgomery County Sheriff’s Office)

A recent video released to the public by the Montgomery County Sheriff’s Office in Texas has gone viral. It shows an unidentified woman arriving at a home in Spring, Texas, with bags and a 2-year-old-boy. Shockingly, she knocks on the door of the home and then runs away, leaving the child alone. The homeowner immediately called police and child services became involved.

According to police, the 2-year-old was unable to give any information and a frantic search ensued. At first, it was thought that the woman in the video was abandoning her son, and social media was ablaze with comments that ranged from “maybe she was abused and was trying to save him” to “she looks trifling and trying to party.”

But the truth is far stranger and sadder. It turns out that the woman in the video was a friend of the boy’s mother, who was in the hospital. The unidentified friend was supposed to drop off the boy at his father’s house, but the friend dropped off the boy instead at the house next door to his father’s.

The father was not home at the time and did not realize what was happening. Thankfully, tips came flooding into the police. But the child was ultimately identified as Courtney Fischer, identified as a reporter from ABC13-News, showed a neighbor video of the child. It turned out that neighbor was actually the boy’s father, Willie Simmons, who identified the child as his son, Royal Simmons.

Even though the boy’s mother stated it was a big misunderstanding, it still did not explain the actions of the mom’s friend who sped away after leaving the child alone. According to ABC13-News, police have identified the woman and she has been questioned.

Rolling out’s requested comment about the case from Officer Scott Spencer, a spokesman with the Montgomery County Sheriff’s Office, but had not received a response prior to publication.