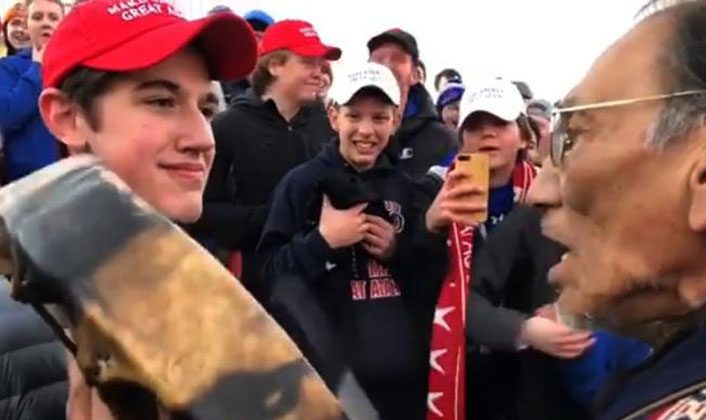 Nick Sandmann stares down Vietnam vet and tribal elder Nathan Phillips, while he was beating a drum and chanting the songs of his people. (Image source: YouTube Screenshot)

The viral video that made national news is now being viewed with a new perspective. This past weekend, students from Coventry Catholic High School received national condemnation over an incident that many called blatant racism and ignorance. In the video, a group of students was seen yelling during a visit to the Lincoln Memorial. One student, Nick Sandmann, was seen wearing a MAGA hat and staring down Vietnam vet and tribal elder Nathan Phillips, while he was beating a drum and chanting the songs of his people.

The video went viral and Sandmann became the face of White male privilege and homegrown racism. In response, Sandmann has hired a public relations firm and is fighting back. Sandmann contends that he was not being racist, but was, in fact, responding to a group of Black men who were hurling racial slurs and ugly statements at the group of White students, whose actions are now being misinterpreted.

A new video has emerged of a small group of Black men identified as part of the Hebrew Israelites religion and movement. A newly released video does, in fact, support the claims of Sandmann that the Hebrew Israelites were the first to engage in racial animosity.  Sandmann says that a fellow student asked a school chaperone if the students could respond back with school spirit chants, to which the teacher told them it was OK. According to Phillips, the situation was tense as he and others beat drums and chanted for peace in their tribal language. After the video went viral of Sandmann and Phillips, the student became a focal point of national outrage and the family hired a public relations firm to handle the situation. In a statement released by the firm, Sandman gives his side of the story. The statement reads in part:

“Because we were being loudly attacked and taunted in public, a student in our group asked one of our teacher chaperones for permission to begin our school spirit chants to counter the hateful things that were being shouted at our group. We would not have done that without obtaining permission from the adults in charge of our group. I was not intentionally making faces at the protester. I did smile at one point because I wanted him to know that I was not going to become angry, intimidated or be provoked into a larger confrontation. I harbor no ill will for this person. I respect this person’s right to protest and engage in free speech activities, and I support his chanting on the steps of the Lincoln Memorial any day of the week. I believe he should rethink his tactics of invading the personal space of others, but that is his choice to make.”

The video of the encounter with the Hebrew Israelites can be viewed below: