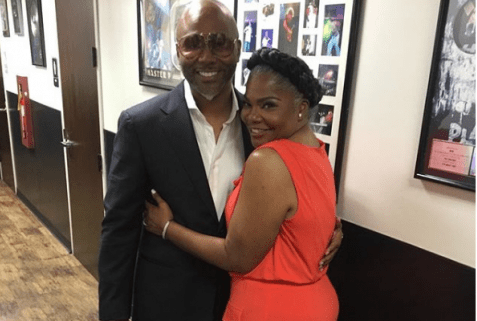 Round 3 of the Mo’Nique-Steve Harvey heavyweight verbal smackdown has commenced.

The Oscar-winning comedienne and her husband-manager Sidney Hicks said some head-scratching utterances on their podcast in the aftermath of their much talked about appearance on Steve Harvey’s eponymously-titled television show last week.

Mo’Nique, 51, took a swipe at Harvey, 62, and others without actually naming them by saying that people will prostitute their principles quickly in order to procure fame and riches.

“There’s still so many that say, ‘Oh, I got it, and I ain’t gon’ do s*** to mess it up. And whatever it take (sic) for me to keep it.’ So what we’re saying right now is, it’s being said out of love,” she said. “Someone put, ‘I hate Steve.’ Please don’t. That’s the last thing we want, baby. The last thing we want is for anybody to hate our brother. For anybody to hate Oprah, Tyler, Lee, Steve, Will Packer. We don’t want nobody to hate our brothers and sisters. What we want is for us to fall in love with each other for real.”

The podcast conversation took an interesting turn when husband Hicks compared his wife’s fight after being blackballed in the entertainment industry to the struggles of venerated Civil Rights giants Martin Luther King, Jr. and Malcolm X.

Furthermore, Mo’Nique, who won her Academy Award for her portrayal of an evil, perverted mother in Precious, claims Harvey encouraged her to stop making waves in public and keep quiet.

Mo’Nique originally began feeling the Hollywood blowback after she shaded fellow Precious colleagues Oprah Winfrey, Lee Daniels and Tyler Perry during the Oscar award season. The Soul Plane actress said the trio was instrumental in blackballing her in the entertainment industry. And in 2018, Mo’Nique would famously announce her boycott of Netflix for offering her less money than fellow comics Chris Rock, Dave Chappelle and Amy Schumer to film a comedy special.