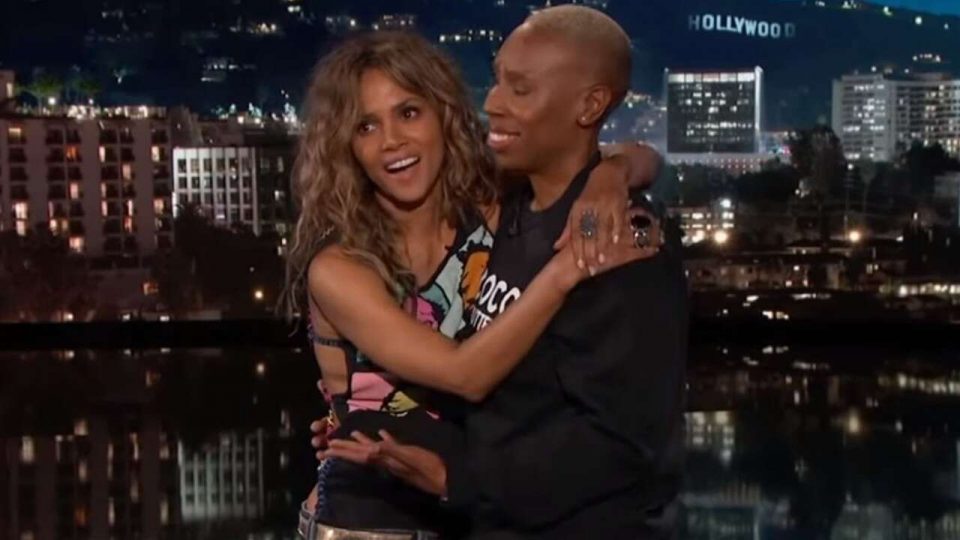 Rising Hollywood star Lena Waithe got the gift of a lifetime when she guest hosted the “Jimmy Kimmel Live!” show on Wednesday, May 22. Kimmel was away working on the highly anticipated “All in the Family” and “Jefferson” show reboots.

American royalty Halle Berry surprisingly traipsed onto the set during the 35-year-old Waithe’s monologue, looking like a snack in simple blue jeans.

“Baby, what can I do for you?” Berry cooed at Waithe.

“I need some inspiration. Like that Oscars speech you gave, that got me hyped,” Waithe answered, referencing Berry’s speech when she became the first African American to snag the Oscar for Best Actress in 2002. “I need you to give me some of that Halle Berry juice.”

Berry, 52, said, “Lena, you know I know you, right? We’ve worked together. So I know that you are a force of nature. You are a beautiful African American queen,” she exclaimed. “… Lena, tonight you are a writer, an actor, a producer and tonight you are a late-night comedian. You about to slay this show!”

Berry added that Waithe was “already winning, girl, because you are dressed way better than Jimmy ever was.”

After the pep talk, the John Wick: Chapter 3 – Parabellum star asked Waithe, “Now, you good or do you need something else?”

“No, I think you need something else,” Berry said slyly before planting a big kiss on the 35-year-old star, who is engaged to be married.

This kiss won’t supplant the famous Madonna-Britney Spears-Christina Aguilera smooches on the MTV Video Awards back in 2003, but it definitely made the audience roar with approval.

Checking in on the show from afar, Jimmy Kimmel was definitely amused: