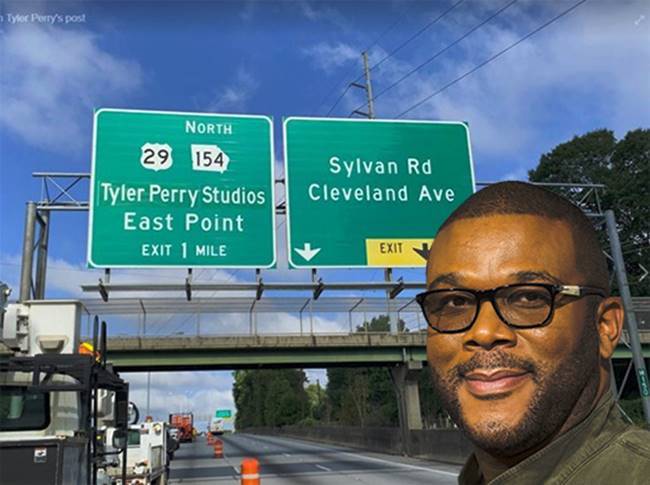 Tyler Perry in front of a sign directing motorists to his studios near downtown Atlanta (Image source: Instagram – @tylerperry)

Steve Harvey is the walking embodiment of the age-old axiom that “when one door closes, another one opens.”

Now that Harvey has a few minutes on his hands after being unceremoniously ousted from the daytime talk show genre — despite “Steve” garnering high ratings for seven seasons — he appears to be focusing his energies on a new project that represents the meeting of two titans.

The Cleveland-born comedian-turned-TV host shared on his Instagram page a video that shows him and Perry hugged up at the celebration of a project as a crowd cheered them on.

“This brothers studios you have to see UNBELIEVABLE !!!!!
Just shot a special project there coming soon…… but y’all gotta go see it @tylerperry @tylerperrystudios,” Harvey captioned the footage.

Perry’s opened his studios’ 12 soundstages to tremendous international fanfare in early October. They feature a variety of sets with each stage named after icons of Black Hollywood.

While Harvey doesn’t have a studio named after him, he filmed at one of the studios and fans are clamoring to find out what magic they created.

Click continue to watch a video of Harvey and Perry at Tylper Perry Studios and read fan reaction.