A Black man in Oakland, California, was detained by members of a private security guard company for taking photos of bicycle racks.

Kenya Wheeler provided a lengthy Facebook post on Thursday, Dec. 12, 2019, and has since provided interviews with local Bay Area news affiliates, including NBC and ABC after the incident, which occurred on Dec. 11.

Wheeler, who serves as the chair of the Oakland Bicyclist and Pedestrian Commission, posted to his Facebook account that he was walking home from yoga class when he noticed a colorful display of yarn on a succession of bicycle racks. Being the proactive leader that he is, Wheeler decided to snap photographs of the “yarn bombs” so he could share them with his board at a later date.

As he made his way up the street, Wheeler was approached by a security guard of a luxury condo building who asked what he was doing. Wheeler responded that he was “taking photos of the bike rack.” He continues to explain in the Facebook post that the officer expressed disbelief, then blocked his path physically and told him he was being detained until Oakland Police officers arrived.

Moments later, the incident took another turn as another officer approached with his gun drawn.

“I don’t know if it was because he saw me with my umbrella and my phone,” Wheeler told NBC. “He pulled a gun out of his holster.”

Wheeler noted that the guard held his gun at his side, but that didn’t make him any less uncomfortable.

“He was getting aggressive,” Wheeler said.

In the video (view in full on the next page) that he recorded in the moment, Wheeler can be heard telling the guard, “You’re not a police officer; you don’t have the right to detain me.”

Unfortunately, Wheeler was made to wait until OPD arrived but then released moments after.

“This is racial profiling, and this is a racial act,” he said in an interview with a local ABC affiliate. “The only reason that I’m being treated this way is because I’m Black.”

Building management has since issued an apology in an official statement that read:

“We share the concerns of the individual on a public sidewalk. He should not have been confronted. Effectively immediately, we have changed our security provider.”

View the entire encounter after the jump. 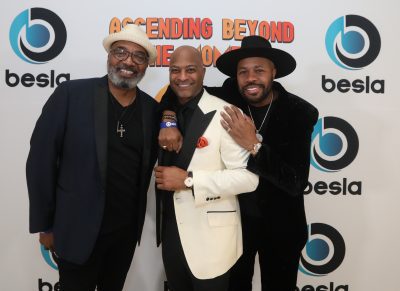