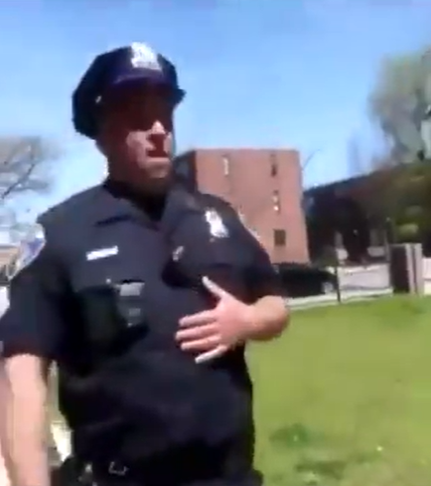 A Baltimore sergeant is being investigated after an incident involving residents at a housing complex on the east side of the city, according to TMZ. The officer was walking through the complex when he was met by a woman recording and executing a light interrogation.

His direct response to her was to cough with his mouth wide open as he walked by briskly.

The woman behind the camera phone responded with a string of vulgarities including, “Oh, I ain’t worried bout that s—. Y’all get that s—. Black people don’t. So you can cough yo White a– back where you live at.”

What appeared to be her attempt at some lighthearted comedy at the officer’s expense, quickly escalated, as the woman continued her verbal onslaught while the officer walked through the grounds, coughing loudly and evidently into the open air.

According to TMZ, Baltimore PD spokeswoman Lindsey Eldridge responded to the incident with the following statement: “We have viewed the video, in its entirety, and believe it warranted being forwarded to the Public Integrity Bureau for an internal investigation.”

The officer is said to be on active duty as the investigation unravels and it is not clear, at the moment, if he has been tested for coronavirus.

Currently, there are 12 Baltimore officers that have tested positive for the virus and another 100 under quarantine, solidifying his actions as disturbing, to say the least.

Flip the page to see the video in its entirety.