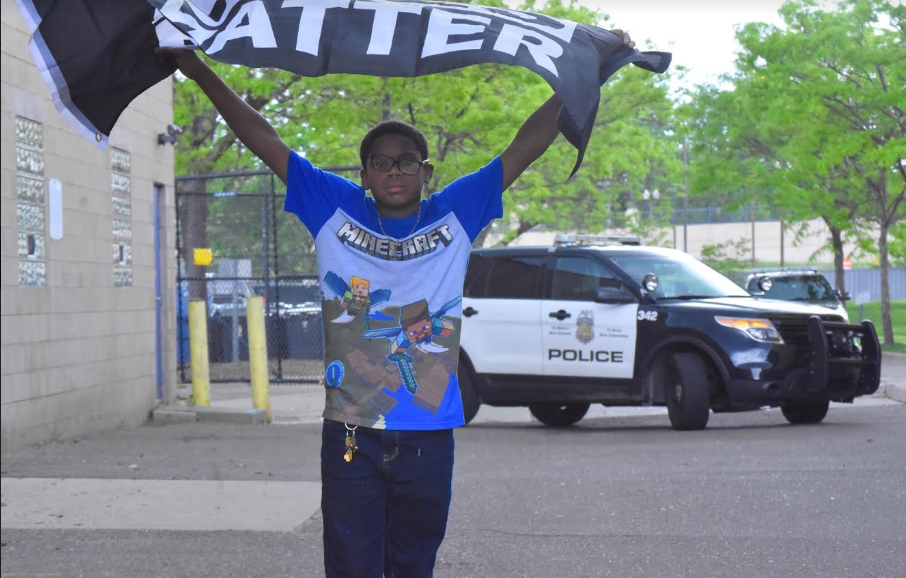 A young man is waving the “Black Lives Matter” flag in Minneapolis as cops sweep around the corner (Photo: Nagashia Jackson for Steed Media)

Amid a local, state and federal investigation into the death of unarmed and handcuffed Black male George Floyd due to a cop’s knee being pressed into his neck, four officers have been terminated.

Minneapolis police chief Medaria Arradondo announced the immediate dismissal of the officers after a bystander filmed one of the cops kneeling with his full weight on the neck of Floyd. Despite repeated cries from Floyd saying he could not breathe, the officer refused to remove his knee. Soon thereafter, the video shows Floyd’s body going limp and motionless.

The cop, in fact, never takes his knee off Floyd’s neck until the ambulance arrives, despite repeated screams and protestations from frantic onlookers. The bystanders believe Floyd was killed at the scene by the officer’s knee, but Floyd was officially announced dead at a local hospital.

Minneapolis Mayor Jacob Frey backs the decision to get rid of the four cops “100 percent.”

Four responding MPD officers involved in the death of George Floyd have been terminated.

This is the right call.

No word yet if and when the officers will be subjected to criminal prosecution in Floyd’s brutal and violent death. But the cacophony calling for the cops to be charged is deafeaning.

This one needs to charged with 1st degree murder. And the other 3, accessory to murder. #GeorgeFloyd was murdered by Minneapolis police. pic.twitter.com/oFBzBxohuh

Flip the page to see the video of cop allegedly killing Floyd: