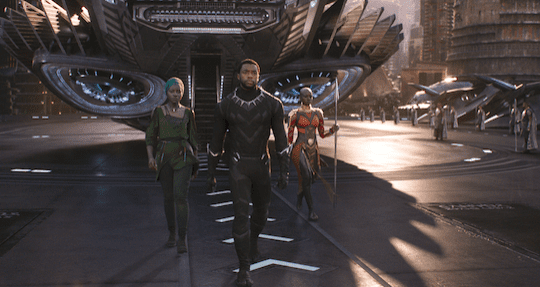 Chadwick Boseman, the leading man of 2018’s record-breaking blockbuster film Black Panther, has passed away from cancer on Friday, Aug. 28, 2020. He was 43.

Boseman succumbed after a four-year battle with colon cancer.

“It is with immeasurable grief that we confirm the tragic passing of Chadwick Boseman. Chadwick was diagnosed with stage III colon cancer in 2016, and battled with it these last 4 years as it progressed to stage IV,” Boseman’s family said in a statement obtained by TMZ. “He died in his home, with his wife and family by his side”

In the statement, Boseman’s family added: “it was the honor of his career to bring King T’Challa to life in Black Panther.”

Boseman’s path to Hollywood immortality and icon status was sowed when he wrote his first play while he was in high school. The South Carolina native then was graduated from HBCU giant Howard University with a degree in fine arts.

As rolling out previously reported, the legion of Boseman fans had grown concerned with his radical weight loss in 2019 that left him virtually unrecognizable. But fans quickly dismissed it becuase they assumed that he was preparing for another role — and Boseman never revealed to the public that he was in the throes of a major medical malady.

I am hearing stories of desperation from people all over the country, and we know our communities are suffering the most and urgently need help. Celebrating #JackieRobinsonDay with the launch of Thomas Tull’s #Operation42, a donation of 4.2 million dollars in personal protective equipment (PPE) to hospitals that service the African American Communities who have been hit the hardest by the Covid-19 pandemic. Thank you, Jackie, for refusing to accept the world as it is, for showing us that we can make a difference.

Boseman became a bankable Hollywood star and critically-acclaimed actor when he slayed the role of baseball legend Jackie Robinson in the movie 42. He also gave flawless and memorable performances while portraying other pioneers, such as the singer James Brown in the flick Get On Up and civil right lawyer Thurgood Marshall in the film Marshall.

For the past four years, Boseman kept his illness a secret. He had already been diagnosed with colon cancer when he starred in the Black Panther in 2018 that shattered records. He was expected to star in the highly anticipated Black Panther sequel when he passed away.

Boseman is survived by his wife and family.