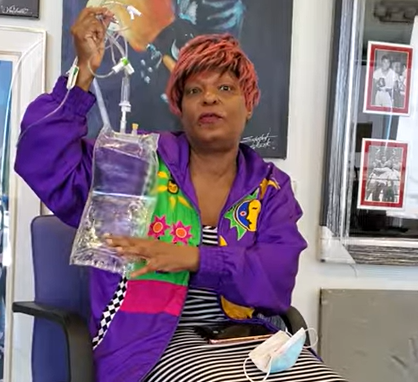 Marsha Steward, who claims to be the cousin of Michael Jackson, was allegedly on the scene and in his house the day he took a deadly shot of propofol. And according to a video that recently surfaced, she allegedly collected a parting gift that has been in her possession ever since.

Stewart apparently got off with the IV drip bag that contained a portion of MJs DNA, which is what she says prompted her to snag it.

In the video below, she describes the grim scene, offering there was uneaten food and scattered pill bottles about the room.

Of all the items in the room that were tied to Jackson, she says the IV drip stood out and she just had to have it.

“Shortly after Michael died, I went to the house on Sunset,” she explained. “I was able to go in and go to the bedroom.”

“This was over by the stand,” she says with the drip bag in hand. “I took it and put it in my purse. This actually belonged to Michael Jackson.”

Steward made no bones about the fact that Jackson’s DNA worked into her decision to keep the bag. “That’s what made me grab it,” she says succinctly. “The blood.”

She also indicates that there was a white substance (likely propofol) that was in the bag, which has since evaporated.

Steward apparently recorded the video for Memorabilia Expert Auctions, which plans on starting the bids at $2500.00.

Peep the video below and let us know your thoughts.