Tyrese Darnell Gibson, 42, was pummeled publicly when he left a curious comment beneath the beautiful anniversary tribute that gospel singer Kirk Franklin wrote to his wife for their 25th wedding anniversary. 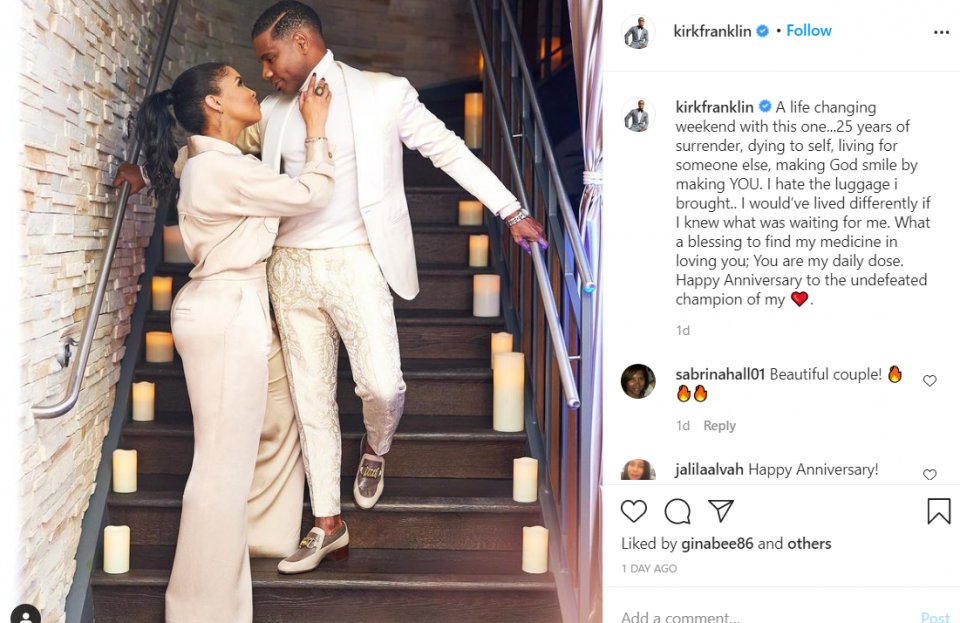 Tyrese did not craft congratulatory words or cloak the Franklins in love on their most momentous milestone. Instead, Tyrese took a different route that the couple’s followers found shameful.

Fans looked askance at Tyrese after he turned Franklin’s homage to his wife into a display of his marital woes with his estranged spouse, Samantha, who recently filed for divorce. Social media got busy lambasting the Fast & Furious star for the message, the timing and the placement of his thoughts.

“Happy Happy Happy Anniversary!!!!!! Magic Magic and more magic,” Tyrese wrote, according to The Shade Room. “Dear Samantha this was supposed to be us…. remember the franklins was our marriage GOALS!!!!!!!!!!!! Smiling smiling…….I’m gonna get her back watch me! [ I think ]”

The post has since been deleted, but not before TSR and others were able to screenshot the message and send it ricocheting through cyberspace.

Check out some of the reactions to Tyrese’s post below.

Tyrese really gotta stop doing this to himself 😩 baby down terrible pic.twitter.com/0lBsosGbdJ

🚨HOT TOPIC!🚨
What is your opinion on what #Tyrese wrote towards his ex-wife, Samantha?

I have absolutely no words behind the foolish #Tyrese left on the Franklins picture. His phone needs to be taken and all of his accounts need to be shut down. He needs to get help. pic.twitter.com/oqlt2mBRN7