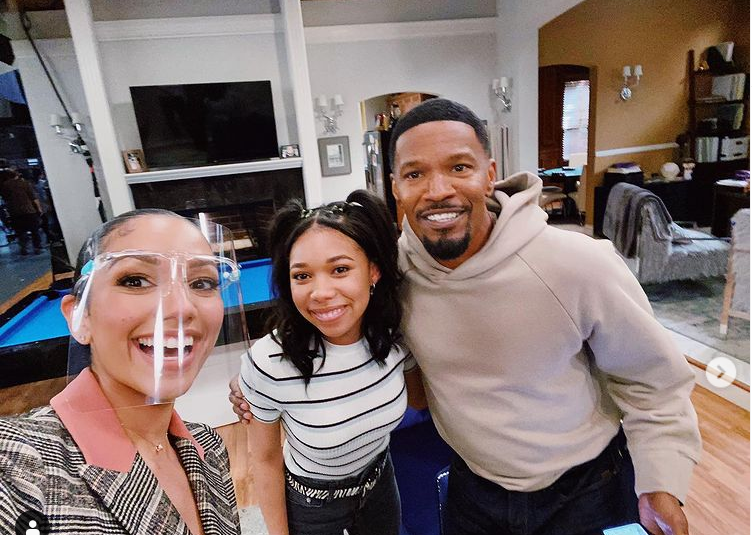 The Foxx family dynasty in Hollywood is revved up to full throttle.

Jamie Foxx is starring in a new Netflix comedy entitled “Dad Stop Embarrassing Me!” that his own daughter, actress and TV host Corinne Foxx, is serving as an executive producer.

The premise for the comedy show emanates, ironically, from back in the day when father Foxx was so extra in cheering on his daughter’s exploits and milestones, that it caused her to cringe in adolescent awkwardness on the regular.

“I was cheering at my final game in high school, and I look into the crowd and my whole family is there in T-shirts with my face on them,” the daughter Foxx reminisces of the embarrassment that burned like fire. “It’s 15 people, and my dad is the ringleader. The last thing a teenage girl ever wants is their dad drawing attention to themselves in that way.”

Corinne Foxx is already the co-host of Fox’s “Beat Shazam,” a musical TV show, with her father and the budding entertained has starred in such films as the horror fare 47 Meters Down.

Being an executive producer of a show that stars her famous father evokes the 2004  Academy Awards when she watched in person as her father Jamie Foxx won the Best Actor Oscar for Ray. She was just 11 at the time but she knew she would follow her multi-hyphenate father into the family business.

For the fledgling Foxx, it is an extra special and surreal experience to create and produce a show based on her own pubescent interactions and conflicts with her father.

Jamie Foxx plays Brian, an overprotective father who engages in a plethora of hilarious histrionics and dramatics as he supports his teen daughter, played by actress Kyla Drew.

“Brian really wants to understand [Sasha] so badly and be there for her — and he maybe goes to extreme lengths to do so,” Corinne Foxx says. “When you’re in the moment as a teenager and going through this stuff, it’s not funny, and you’re actually upset. But it’s so fulfilling to see how these stories have grown into something that my dad and I can cherish and love. This is our story, and it’s just like, ‘Wow, at least we went through all that for something,'” shared the younger Foxx.

Flip the page to check out a trailer of the new Netflix sitcom “Dad Stop Embarrassing Me!”