Pro football Hall of Famer Deion Sanders’ debut win as head coach of HBCU Jackson State University was bittersweet on Sunday, Feb. 21, 2021. After a triumphant 53-0 defeat over Edward Waters College, Sanders revealed during a post-game press conference that his office had been broken into and robbed.

Sanders admitted he was more hurt than anything because of the sacrifice he’s making to shine more of a spotlight on HBCU athletics. “I’m pissed off right now because I have mixed emotions,” Prime Time said. “We won. The kids played really well. But while the game was going on, somebody came in and stole every darn thing I had in the coach’s office. Credit cards, wallet, watches. Thank God I had on my necklaces.”

Following Sanders’ press conference, reports and tweets began circulating that the items were only “misplaced and found.” Sanders shut down those allegations, explaining that there was a witness to the theft. 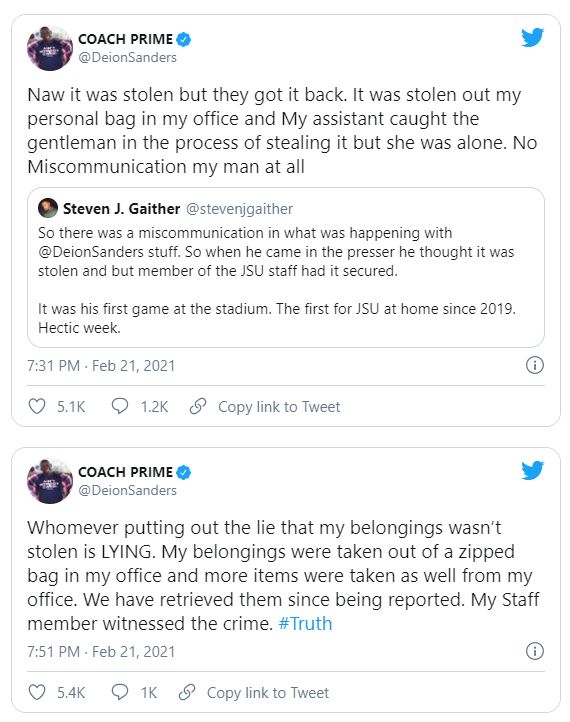 “Immediately following our win today, several items belonging to Coach Prime were taken from the locker room. Those items were quickly recovered and returned,” the statement read. “While we consider this an isolated incident, we are thoroughly reviewing security protocols to ensure this does not happen again. However, we refuse to let this dampen the victory for our JSU Tigers, who have worked hard for this moment.”

The Super Bowl champion can’t seem to catch a break since signing on to coach the Tigers. In January, his truck was broken into, but the charismatic athlete took it all in stride. He just wanted a sentimental boom box returned and put out a call to the village.

His belongings were returned with a note attached explaining that some kids had done the deed and they were sorry and thankful for what he’s bringing to the community.

Check out Prime Time’s emotional press conference uploaded by Cut Day Sports on the next page as he talks about the theft and his first victory as a college football head coach.