After being confused for one another for the past few years, Boosie Badazz and Flavor Flav have finally linked up to do a project together.

Boosie, 38, who was born in Baton Rouge, Louisiana, as Torrence Hatch Jr., said that he had gotten tired of folks saying he bears a strong resemblance to the New York-born Flavor Flav, 62, whose real name is William Jonathan Drayton Jr.

Back in April 2021, Boosie went on a profanity-laced rampage at an undisclosed airport when a female fan mistook him for the Public Enemy group member as he exited the plane.

“I don’t look like no d— Flavor Flav, I look like Boosie,” he raged on his Instagram (IG) live post at that time. “That’s why I don’t wear these d— red glasses. Got me f—-d up early this morning. It’s too early in the morning for this s—.”

Ironically, a few days later Flav hopped on his own IG live to say pretty much the same thing, as folks in Vegas had been running up to him and calling him Boosie. Both men dissed each other on IG live, claiming that the other could not possibly measure up to him.

Now, the two are breaking bread together. Flav and Boosie appeared in a video posted on Instagram and Twitter that Boosie will be a guest on Flav’s podcast “The Flavor Flav Show.” 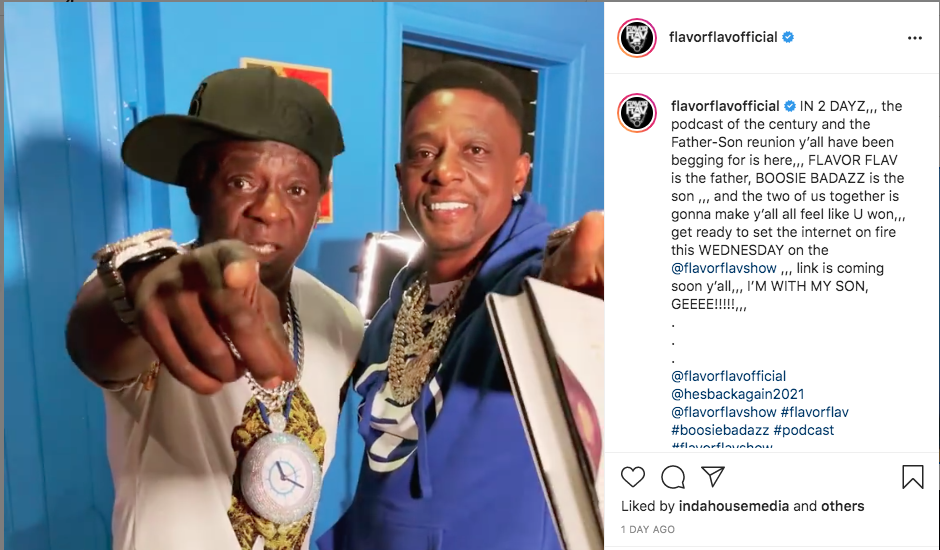 Boosie posted the video on his IG page as well as the pair told fans to check out the third annual Boosie Bash, Aug. 27-28, 2021.

Boosie and Flavor Flav finally linked up after people were mistaking them for each other 🤣 pic.twitter.com/xLbfrjXGbC

not flavor flav gon be at the boosie bash😂😂😂😂😂

They should do a tv show together pic.twitter.com/lzKoWfHYgh

Serena, Zendaya, Beyoncé among the most Googled Black women of 2022 (photo)

Robert Glasper was a vibe at the City Winery in Chicago

Serena, Zendaya, Beyoncé among the most Googled Black women of 2022 (photo)

Robert Glasper was a vibe at the City Winery in Chicago