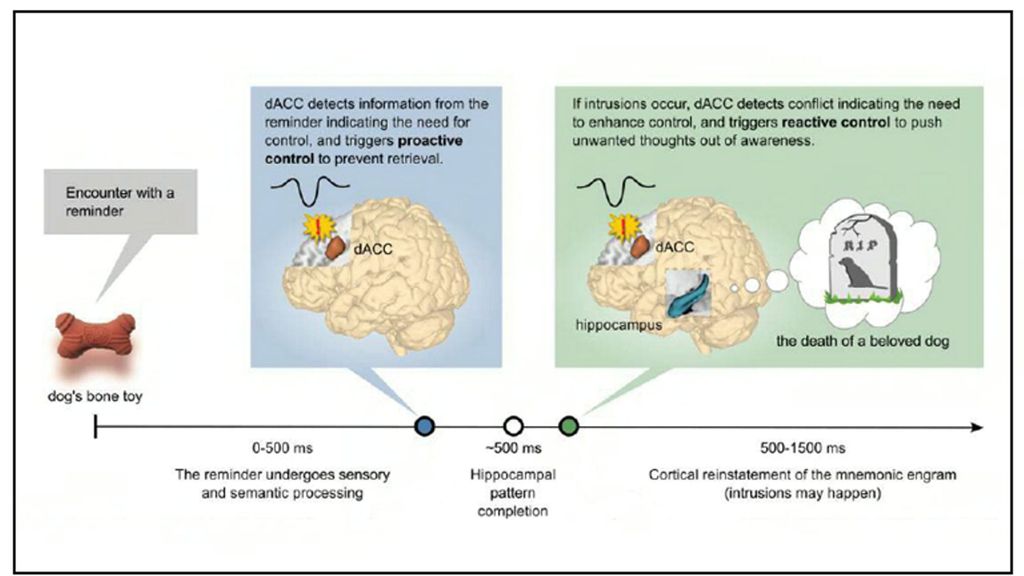 The brain can suppress unwanted memories – and sounds an ‘alarm’ if one slips through the net, according to a new study.

A region dubbed the ACC can identify intrusive thoughts and call for backup to help suppress them, say scientists.

While people enjoy reminiscing about the good times, there are some memories that are best forgotten.

This is easier said than done, however, and people often find themselves thinking unwanted thoughts.

Now Cambridge University researchers have discovered the brain has an inbuilt memory blocker.

Study author Dr. Maité García said: “When people suppress unwanted memories the ACC is among the regions more active, but its contribution to inhibitory control over memory remains undefined.

“Our findings reveal a central role of ACC in triggering inhibitory control that causes motivated forgetting.”

The brain activity of 24 participants was measured by the researchers using EEG and fMRI scans while they completed a memory test.

During the exercise, people were asked to memorize word pairings like “gate and train” which had been selected from the Thesaurus of Modern Chinese.

They were then shown one of the words and asked to recall its pairing or focus on it without thinking about the other word.

Activity spiked in part of the brain known as the anterior cingulate cortex (ACC) when participants tried to suppress their memory during the first 500 milliseconds of the task.

The ACC then relayed this information to another part of the brain dubbed the dorsolateral prefrontal cortex (DLPFC).

This area then suppressed activity in a third region known as the hippocampus, which is known to play an important role in helping people recall memories.

Activity levels in the ACC and DLPFC remained low for the rest of the trial, suggesting their intervention had been successful in blocking out the memory.

The brain’s memory blocking talents could extend even further to helping people forget, according to the researchers.

If the unwanted memory was not stopped early enough, the ACC sounded the alarm, increasing its activity to signal the DLPFC to get involved, the researchers found.

Dr. García said: “In summary, this study provides evidence that theta mechanisms in ACC are key to triggering inhibitory control by DLPFC during motivated forgetting.

“These mechanisms can be proactively engaged by external warning stimuli, helping to rapidly preempt unwanted thoughts.”

The findings were published in the journal JNeurosci.

The post Brain Can Block Unwanted Memories And Sounds Alarm If One Slips Through Net appeared first on Zenger News.