Detroit native Zwena Gray is generating a lot of buzz as she embarks on a historic trip through an entire Canadian Underground Railroad trail – and she’s doing it all by foot.

Gray, a 20-year-old undergraduate student at Trent University in Peterborough, Ontario, is marching to become the first Black woman since the days of slavery to hike the entire 559 miles of The Bruce Trail. Also called “The Freedom Trail,” it is the oldest and longest marked continuous Underground Railroad path in Canada.

Some urbanites may not realize that the Underground Railroad in America, whose history was reintroduced to younger audiences via the movie Harriet (which paid homage to slave freedom fighter Harriet Tubman), did not stop at the Canadian border. Many Blacks were forced to march on and settled in Canada in order to escape slavecatchers who tried to hunt them down and return them to their slavemasters.

“Being from Detroit, I really wanted to bring that connection to nature to my community,” said Gray who fell in love with the outdoors during her formative years from many family trips. “It’s not only important for Black people to be present in these natural environments, but it’s also important for us to showcase just the freedom and liberation and just the ease of existing in these spaces.” 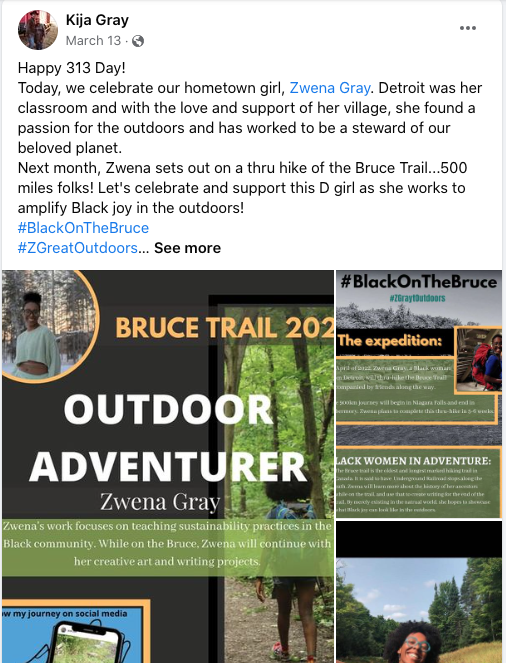 Gray’s trek enables her to marry her passions for the outdoors and history while also majoring in environmental studies and science, coupled with a minor in gender and social justice studies.

The environmentalist also indicates that she is paying homage to the escaped slaves who trekked along this same path, which she equates to sacred ground. She is a veritable sponge as she is eagerly soaking up the encyclopedia-thick volumes of information from historians along the trail. 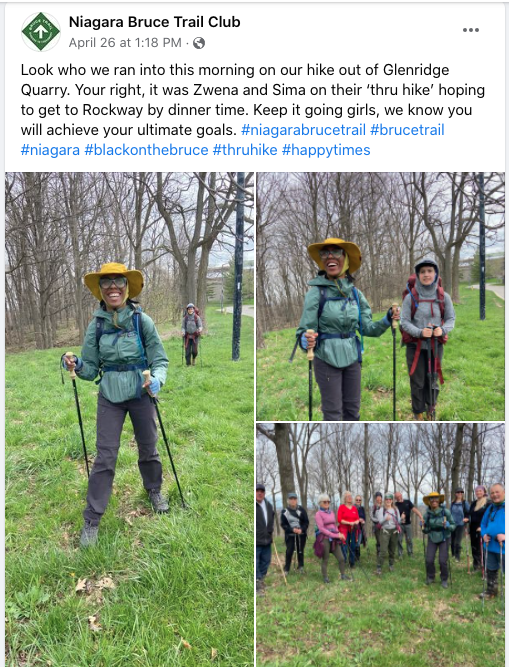 Gray has been chronicling her unique odyssey at regular intervals on Instagram as she hopes it will inspire Blacks and others to reconnect with history and nature.

“I’m going to be making natural hair videos, do videos about how you handle your period in the outdoors, and even doing fun stuff like tent talks every week for my Instagram,” Gray told the news station. “And then I’ll also be having YouTube videos kind of more educational about the historians that I talked to and the areas that I go through — more of a day-to-day thing.”

Gray and a friend began the trail in late April 2022 and hope to wrap up the long journey in June. According to the Facebook group, Niagara Bruce Trail Club, Gray aspires to curate exhibitions and events in the near future that will reinvigorate enthusiasm for outdoor recreation.

To travel along the trail (virtually) with Gray, follow her on Instagram at @just.zee. You can also  support her monumental expedition via the link, https://www.mightycause.com/story/Blackonthebruce/

Do You Want To Hear Prince Harry Speak? It Will Cost You Around $1000

Do You Want To Hear Prince Harry Speak? It Will Cost You Around $1000